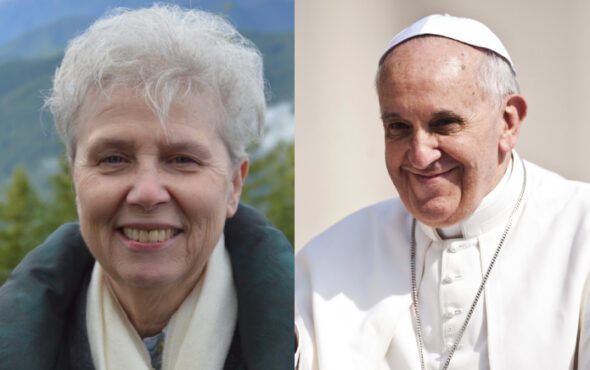 Pope Francis sent a congratulatory letter to a US nun for her decades-long work of LGBTQ+ advocacy.

In a letter sent on 10 December, the Pontiff praised Gramick for her “years of closeness, compassion, and tenderness” for the queer community.

“You have not been afraid of ‘closeness’,” he wrote. “And in getting close you did it ‘feeling the pain’ and without condemning anyone, but with the ‘tenderness’ of a sister and a mother.”

Over the last 50 years, Gramick has used her voice in solidarity and support of LGBTQ+ people.

The two established the organisation as an educational resource for Catholic individuals to learn about and support the LGBTQ+ community.

Due to the group’s science and theology teachings regarding homosexuality, New Ways faced pushback from the Vatican.

Gramick was then put under an 11-year investigation by the Congregation for the Doctrine – which resulted in her being temporarily banned from working with the LGBTQ+ community.

When asked about the letter, she told America Magazine that she felt “wonderful” by the sentiment.

“I felt wonderful, of course,” she explained. “But the Scripture that came to me was from John: ‘I do not call you servants, I call you friends.’

“That’s how I felt, like I was getting a letter from a friend. I think that’s how Pope Francis wants us to live. And it’s what I hope we would be as a people of God: a community of friends.”

Back in December, a webinar from the organisation was included in the Vatican’s online resource sector.

The educational link was removed without explanation and was later restored by the Communication Director of the Synod of Bishops – Thierry Bonaventura.

In a statement, he apologised for “any hurt” the action caused, writing: “In walking together, sometimes one may fall, the important thing is to get back up with the help of the brothers and sisters.”

Shortly after receiving the apology, New Ways Ministry praised the Vatican and described the gesture as “historic”.

“Apologies are powerful in their ability to build bridges of reconciliation and justice,” said the group’s executive director Francis DeBernardo.

“Vatican officials rarely apologise, and they almost certainly have never apologised to LGBTQ people or an LGBTQ Catholic ministry.”

Although the Pontiff has praised Gramick and New Ways Ministry, his acceptance of the queer community has constantly fluctuated over the years.

In 2018, Francis came under fire after shooting down the idea of LGBTQ+ people within the clergy, stating: “The issue of homosexuality is a very serious issue that must be adequately discerned from the beginning with the candidates.”

However, the following year he requested to meet with Rev. James Martin to have an open discussion about LGBTQ+ Catholics. Martin described the meeting as “consoling, inspiring and encouraging.”

The religious figure also made headlines in 2020 when he told parents that God and the church loved their LGBTQ+ children.