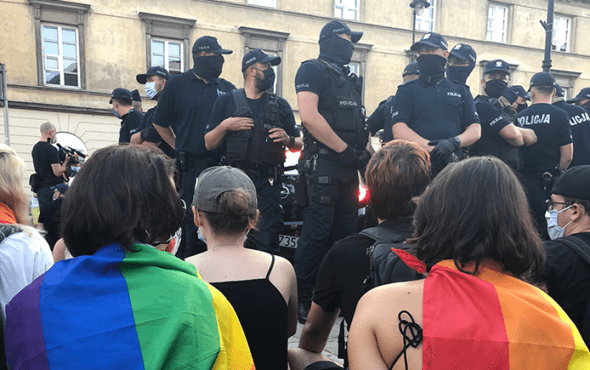 Crowds of Polish nationalists and defenders of LGBTQ+ activists rallied against each other in central Warsaw on Sunday.

Hundreds of protesters, from either side, gathered in front of Warsaw University’s main gate to voice their political views.

Nationalists were seen burning a Pride flag while denouncing what it stood for, while LGBTQ+ protesters painted rainbow colours on the street. Tensions ran high during the clash as both parties were kept apart by several police vans and policemen.

The anti-LGBTQ+ group’s former leader, Krzysztof Bosak, won nearly 7% in the first round of a presidential election in June.

During the on-street demonstration, Bosak openly declared his conservative and decisive opinions, striving to condemn any pro-LGBTQ+ sentiment: “This is a toxic ideology, dangerous, revolutionary and radical.”

The topic of gay rights stood as a heated discussion point during Poland’s recent election campaign. In mid-July, Duda narrowly claimed a second term as president.

For the Catholic country, the conversation around LGBTQ+ rights and acceptance continues to be divisive. During a campaign speech, Poland’s president, Andrzej Duda, called the advocation of LGBTQ+ rights an “ideology” more destructive than communism.