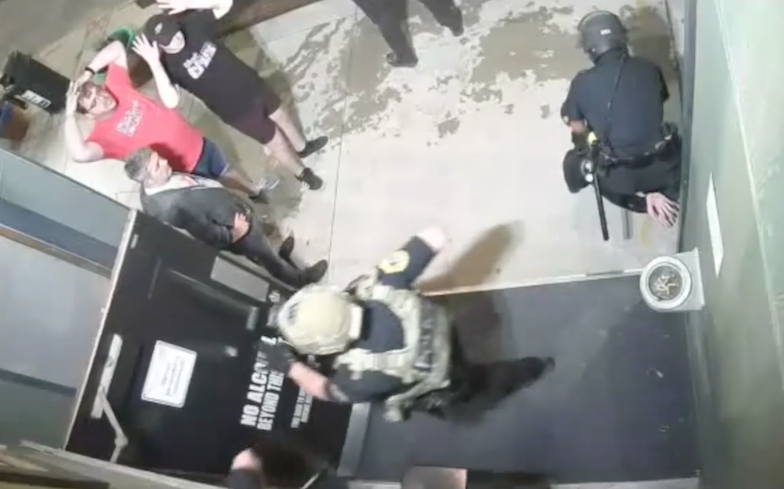 “We were doing absolutely NOTHING wrong, but yet they decided to terrorize us, seize our home, and even fucking arrest our family for doing NOTHING.”

The Blazing Saddle, a gay bar in Des Moines’ East Village in Iowa, was “violently raided” and “terrorised” by police officers on Monday (1 June) – the first day of Pride Month.

According to an official statement from the bar, staff members were watching a Black Lives Matter protest a few blocks away at the Capital building and were on hand to assist the injured with a “backpack full of first aide supplies.”

“We were here just keeping an eye on the bar, not even at the protests that evening,” said employee Vana B.

Shortly after, a truck with numerous police officers in riot gear approached the street “with big fucking guns and stormed” the bar, placing three of the employees on the ground while four others – including Vana – fled inside.

“We were told to unlock the door and 3 of us were told to come outside while 1 had run to hide. As they held us at the front door with guns, 2 officers went into the bar to make sure it was clear,” the bar wrote.

Police quickly located the fourth person, “thoroughly frisked them” and continued to sweep the bar looking for others, before placing the three workers outside in handcuffs and raiding their backpack of supplies.

“They were asked questions and then taken away to jail by the police – all while other actual protestors were allowed to leave without incident. The 3 who went to jail waited approximately 2+ hours for processing, were bailed out and still had to remain in the jail and were denied medical attention/care as 1 was one maintenance meds that were in their confiscated backpack.”

Vana said she was “terrified” during the incident, adding: “We were doing absolutely NOTHING wrong, but yet they decided to terrorize us, seize our home, and even fucking arrest our family for doing NOTHING. WRONG.

“And don’t feel bad for us, seriously, don’t. FEEL FUCKING AWFUL for The Black Community who has to fucking live in a world where this one single night for us is an ENTIRE FUCKING REALITY for them every god damn day. Let that sink in.”

Read the official statement from The Blazing Saddle here or below.

Protests and demonstrations erupted in cities across the US – and the world – last week following the murder of George Floyd, a 46-year-old Black man who was killed after a white police officer knelt on his neck for over eight minutes.

11,000 protestors have been arrested in the US so far, while many others have been hospitalised and left with permanent eye damage due to excessive force from authorities, such as the use of tear gas and rubber bullets.