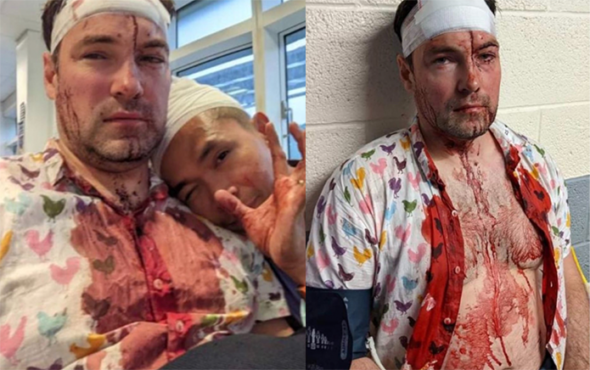 Three suspects have been apprehended by police after a gay couple were left bloodied and beaten in a horrible attack in Birmingham’s Gay Village.

On 15 August, partners Rob and Patrick, from Bicester, Oxfordshire, were in Birmingham for a friend’s housewarming party and decided to go out in the city’s Gay Village.

The pair left Missing Bar where they had initiated a light-hearted conversation with a group of men carrying balloons.

After joking about whether the balloon was for a birthday the group of four men, who were said to be in a black SUV, retaliated in an aggressive manner and started physically assaulting the couple.

“They did not like that and went into all sorts of foul language, including homophobic slurs directed at us,” the pair said.

Patrick tried to record the assailants on his phone, but the attackers stole his phone and pushed him to the ground before fleeing the scene.

Due to being attacked with glass bottles, Rob received 16 stitches in his head and had six more on his hand.

On 26 August, West Midlands Police confirmed that two arrests had been made in relation to the case following a public appeal.

Two men were subjected to homophobic abuse and later attacked with bottles in the early hours of Sunday 15 August.

A 24-year-old and 21-year-old were arrested on suspicion of robbery and wounding on 23 August and have been bailed while investigations continue.

In addition, a 31-year-old man handed himself in on 21 August – though he has also since been bailed.

“Everyone should feel safe and comfortable to be who they are, we will not tolerate people being targeted in this way,” said Michelle Cordell, a detective inspector, in a statement.

“We are proud to police our diverse communities and will not stand for hatred directed towards people because of their race, religion, sexual orientation, disability, or gender identity.

“Less than two weeks after the Bromsgrove Street attack, we have now traced and apprehended three suspects and our investigation remains active. We also want to thank those members of the public who supported our appeal.”