Poland’s LGBTQ+ community marches for equality in Gdańsk: “We have the power” 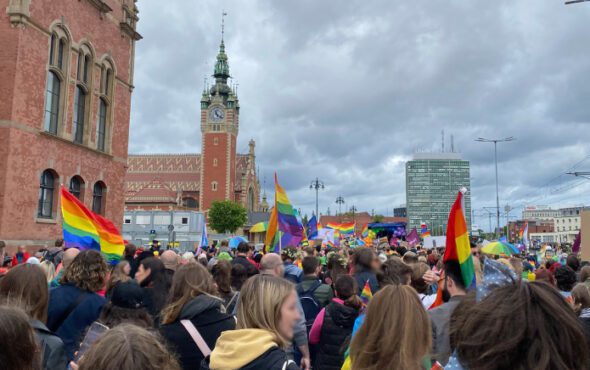 Thousands of LGBTQ+ people and their allies took to the streets of Gdańsk in Poland on 28 May to march for equality.

Roughly 7,500 people are believed to have taken part, according to a police representative who spoke to Reuters.

Those involved in the city’s seventh annual Equality March held placards with messages such as “Jesus would walk with us” and “We make love not war” written on them.

The slogan for this year’s event was “We have the power” and many waved Pride flags as they walked through Gdańsk.

Sabina Joeck, a 24-year-old who took part on the day, said: “It’s very difficult to be queer in Poland, so it’s nice to find a place where you can be yourself.”

Very special day with some of my Gdansk colleagues at the Equality March. Proud to work for a company that visibly supports our LGBTQ community in Poland #PrideMonth #LGBTQ 🏳️‍🌈 pic.twitter.com/wG07yGoOCr

Poland’s first Pride march took place in 2001, though LGBTQ+ equality in the country has been less stable in recent years due to the implementation of ‘LGBT-free zones’ there.

President Andrzej Duda has also expressed an array of homophobic views, including that being LGBTQ+ is “an ideology”.

There was a small amount of opposition to the event in Gdańsk, with some in attendance holding Catholic rosary beads and a banner claiming that the LGBTQ+ community is a “lobby” attempting to sexualise children.

One of these counter-protesters said: “I am not against homosexuals, these are just ordinary people like us. But I don’t want them to get to our children.”