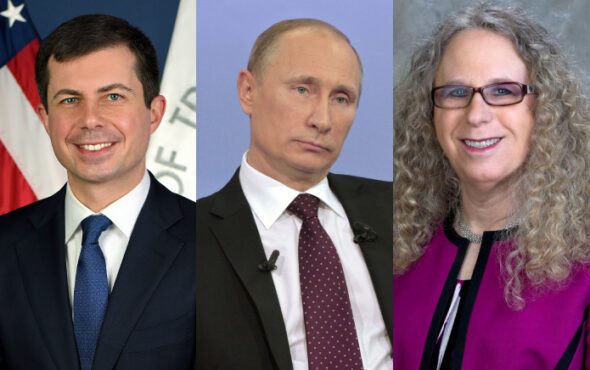 Pete Buttigieg and Rachel Levine are among the 963 American individuals permanently banned from entering Russia.

The country’s Foreign Ministry released the updated list on 21 May as a symbolic move in response to the USA’s support of Ukraine since Russia’s invasion began on 24 February.

The names are made up of politicians, journalists, deceased lawmakers, regular citizens and even prominent figures like Morgan Freeman.

An array of LGBTQ+ people are featured, including entrepreneur and activist Rich Eychaner, Secretary of Transportation Pete Buttigieg, Assistant Secretary for Health Rachel Levine, and all of the out members of the House of Representatives such as David Cicilline and Sean Patrick Maloney.

“In the context of response to the constantly imposed anti-Russian sanctions by the United States and in connection with incoming requests about the personal composition of our national ‘stop list,’ the Russian Foreign Ministry publishes a list of American citizens who are permanently banned from entering the Russian Federation,” the Foreign Ministry said in a statement.

I guess we will have to cancel our August family trip to Moscow… https://t.co/wthx35BDdJ

Donald Trump is not named, with former Secretary of State Mike Pompeo being the only notable person from his administration to be included.

The USA, alongside a range of other nations, has imposed a number of sanctions on Russia in a bid to penalise those who have benefitted from Putin’s regime and ultimately bring an end to the war.

The UK’s include, but are by no means limited to, a commitment to ending all imports of Russian coal and oil by the end of the year, prohibiting Russian flights from entering the UK’s airspace, and sanctioning a number of individuals and businesses who are believed to be close to the Kremlin.

Although some sanctions may seem insignificant, they are among the harshest actions a country can take against another – short of going to war or engaging with military action.

Russia’s list of banned individuals can be viewed in full here.