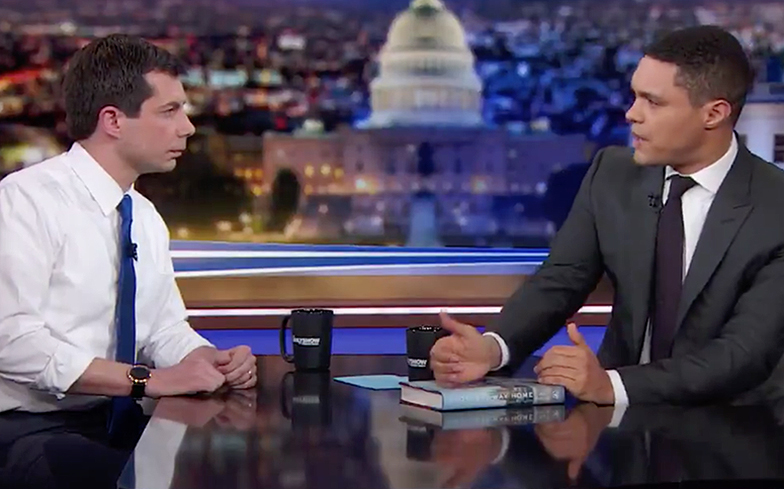 Pete Buttigieg has addressed the topic of white privilege in a new interview.

During an appearance on The Daily Show, the openly gay presidential hopeful was asked by host Trevor Noah about the high level of media interest and coverage he’s receiving in his campaign to make it to the White House for 2020.

“Some people have said the reason you get so much media coverage […] is because you’re benefitting from white male privilege, where candidates of different skin colours wouldn’t get the same level of coverage,” Trevor proposed.

Asked whether he believes he’s benefitting from white privilege, Pete replied: “Well I’d like to believe it’s my qualities and my message.

“But I’ve been reflecting on this, because one of the things about privilege, especially white privilege and male privilege, is that you don’t think about it very much.

“You know, it’s being in an out group where you are constantly reminded of it, it’s not when you are in a majority or a privileged group, and so I try to check myself and make sure I try to understand the factors that explain why things are going well.”

Pete went on to acknowledge that, while he may be at a disadvantage among certain voting demographics because he’s gay, he does benefit from being white and male.

“I do think there’s a media environment that kind of pushes people into lanes, whether they comfortably fit there or not, and I do think it’s simply harder for candidates of colour or for female candidates,” he continued.

“I’m very mindful of that. The only thing I know how to do about that from where I’m sitting is to try to be true to a message and a vision that’s meaningful and to be as respectful as I can to the others.

“I don’t view myself as having opponents, but competitors, and I think each of us needs to compete based on what we have to offer.”

Buttigieg, a Navy veteran who’s currently serving as mayor of the town of South Bend in Indiana, is a Democratic candidate for the US presidential election in 2020, and if elected, will become the first openly gay president of the United States of America.