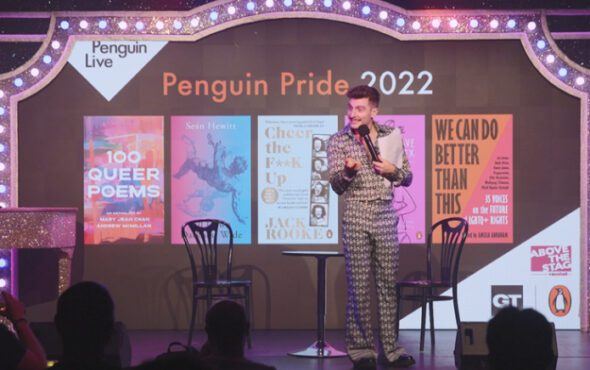 On Wednesday evening (20 July), Penguin Pride in association with GAY TIMES invited a selection of queer writers to discuss the stories that have most “changed and shaped” them to a beautifully intimate audience at Above the Stag in Vauxhall.

Warming the crowd up with his charm, Riyadh recommended Alan Downs’ The Velvet Rage before introducing comedian and author of Cheer the F**K Up: How to Save Your Best Friend and creator of the hit autobiographical comedy Big Boys, Jack Rooke, who shared a hilariously candid original comedic poem about shame after lamenting his short-lived career as a spoken word artist.

Poet and lecturer Sean Hewitt then discussed the motivations behind his memoir All Down Darkness Wide, telling the audience that the book deals with topics of depression and growing up as a queer man.

Reflecting upon his own experience caring for a loved one with depression, Sean commented on the dearth of literature that approaches mental illness from the perspective of those indirectly affected.

Hoping to have filled that gap in part through his book, Sean summed up the message of his memoir, “There’s no reasoning with depression.” How to Have Feminist Sex author Flo Perry later took to the stage to discuss how her queerness gave her license to rethink sex outside of what is dictated by heteronormative ideals.

In line with the discussion of re-imagined realities, Flo recommended Yannis Varoufakis’ Another Now, describing it as a powerful tool to help imagine a better tomorrow.

Writer Prishita Maheshwari-Aplin was joined by author Liam Konneman for a discussion around the value of queer stories.

Speaking about the lack of queer literature available to them in the past, Prishita praised Ocean Vuong’s tender memoir On Earth We’re Briefly Gorgeous.

Liam rounded off the discussion making the point that in order for queer literature to continue to thrive, authors need to be given the chance to develop their talent as they write themselves into an emerging canon. The evening ended with a poignant discussion on asexuality and asexual erasure led by model and co-founder of International Asexuality Day, Yasmin Benoit, who shared an informative extract from her essay in essay collection We Can Do Better Than This.

The event was an eye-opening space for discussion of how literature can give voice to the issues that affect our community.

Prior to the event, panellists Prishita Maheshwari-Aplin and Liam Konneman wrote about the books that helped them understand their queerness, you can read Prishita’s piece here and Liam’s piece here.