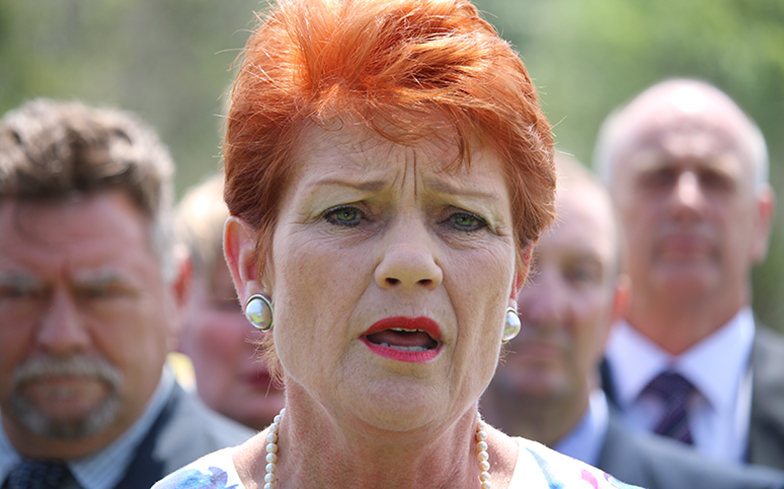 Pauline Hanson has claimed that same-sex marriage will lead to polygamy and underage unions.

Earlier this month, it was announced to much celebration that 61.6% of Australians had voted in favour of legalising same-sex marriage in a voluntary, month-long postal survey on the issue.

But that vote was non-binding, and merely provided a guideline for politicians to get an idea of what their public wants before they themselves decide whether or not to pass a bill to make marriage equality a reality.

During a debate in Parliament this week, Hanson, the leader of far-right nationalist party One Nation, warned that introducing marriage equality to Australia would “open up a can of worms” and explained her reasons for voting ‘No’ in the postal survey.

“My concern is that in time to come the Parliament and its members could at any time change to include multiple marriages, marriages of people under a certain age,” she said.

“And I don’t believe that is the will of the people. If it was a referendum it would be enshrined in the constitution and cannot be changed by Parliament but only by the people.”

For the record, not a single country that’s opened up marriage to same-sex couples has gone on to legalise polygamy or underage unions.

Pauline also fell back on her tried-and-tested ‘Won’t somebody think of the children?’ fear-mongering tactic, falsely claiming that 11% of children in Australia now have same-sex parents, as if that would somehow be a negative thing.

“Gay couples now have about around 11% of children,” she said, “and there will be an increasing number of children in these relationships.”

Data from the 2016 Australian Census shows that only 0.25% of kids in Australia have same-sex parents.

She continued: “What do we do as a society when we get to a stage when these kids are going to school and … the teacher says ‘I want you to draw a picture of your mum and dad or grandma and grandad?’

To round it all off, Pauline questioned why the majority are being dictated to by the minority.

“I have no problems with people being in love and doing what they want to but why do you have to put this push on the majority of the population?” she asked.

Meanwhile, Greens Senator Sarah Hanson-Young recently gave an emotional speech for the legalisation of same-sex marriage, recalling how her childhood best friend “struggled” with being gay in a small town.