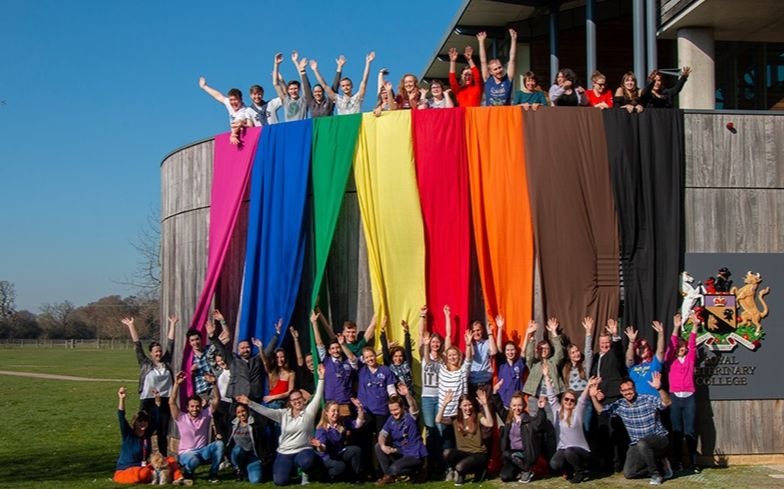 The display also featured the brown and black stripes for the rainbow flag.

To commemorate the end of LGBT History Month, an openly gay pastor at the Royal Veterinary College of London (RVC) has created a stunning rainbow display alongside students.

The display was also created to highlight the RVC’s new LGBT+ Staff & Allies Network, and the design featured the brown and black stripes for people of colour.

Rev. Andy Marshall, the Chaplain and Interfaith Advisor to the RVC, said on their press website: “It has been a joy to organise this event, to see and meet those staff and students who have found it meaningful. I am indebted to the staff that helped make the event a success.

“My hope is that this will speak to those who are a part of under-represented communities – both inside and outside the College – and witness to our commitment to make the Royal Veterinary College a safe place for all to flourish.”

Professor Stuart Reid, the principal of the RVC said: “The RVC seeks to embrace diversity in all its manifestations, but today has been more than that.

“Joining with my colleagues and our students, it has been an opportunity to advocate and celebrate publicly our community as a place we can call home.”

And Ceri Chick, the Vice President for Welfare at the RVC, added: “The event was a marvellous opportunity for the RVC to celebrate its diversity in style, with the university coming together as one.”

“This is a huge announcement for us and something we are extremely proud of. We have spent the past three years listening to our audiences and have curated these new elements of the festival to connect with as many LGBT+ people as possible,” said Mark Fletcher, chief executive for Manchester Pride.

“The progressive city of Manchester has always led the way in the advancement of LGBT+ rights. Having listened to everyone that engages with the festival and reviewed the landscape of Pride celebrations throughout the world, along with the issues still being faced by LGBT+ people across Greater Manchester, we felt that it was important to deliver a festival that not only celebrates LGBT+ life but also clearly continues to campaign for equality and acceptance.