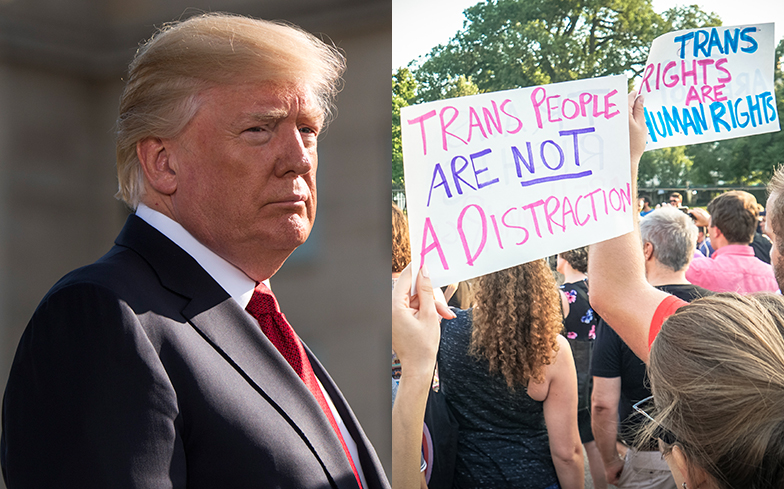 The scientists slammed the Trump administration for using “pseudoscience.”

Near the end of last month, a memo was leaked to the New York Times showing that the Trump administration was mounting an attempt to ‘define trans people out of existence.’

The memo was met with condemnation from trans people and other activists. “I woke to this. I’m honestly terrified. Basically TRUMP asked every gov agency define sex as only man or woman NOT Changable [sic],” RuPaul’s Drag Race star Peppermint posted on Instagram.

Pop star Kim Petras added: “Gender roles don’t define people at all. Nobody is better than anybody else. If you’re male or you’re female, if you’re gay or straight or bi, if you’re transgender, if you’re religious or not religious if you like fucking Harry Potter, if you’re rich or you’re poor.

“Shit is just labels we put on ourselves that make us miserable. Equality is about seeing beyond that and seeing that what matters is if you’re a nice person or if you’re good at something, if you’re honest, if you’re fun. You’re so much more than just a fucking gender.” And now over 1,600 scientists, including nine Nobel Prize winners, have joined the backlash, by signing an open letter condemning the memo. Their letter, which was signed by over 700 biologists and 100 geneticists, was titled “Transgender, intersex, and gender non-conforming people #WontBeErased by pseudoscience.”

In the letter, they write: “The proposal is in no way ‘grounded in science’ as the administration claims. The relationship between sex chromosomes, genitalia, and gender identity is complex, and not fully understood.

“There are no genetic tests that can unambiguously determine gender, or even sex. Furthermore, even if such tests existed, it would be unconscionable to use the pretext of science to enact policies that overrule the lived experience of people’s own gender identities.”

The letter then moved onto the health risks for if the memo came into force, saying: “Multiple standards of health care for transgender and intersex people emphasise that recognising an individual’s self-identified gender, not their external genitalia or chromosomes, is the best practice for providing evidence-based, effective, and lifesaving care.

“Our best available evidence shows that affirmation of gender identity is paramount to the survival, health, and livelihood of transgender and intersex people.”

The letter then called for political action: “Given its scientific and ethical failings, we call upon the administration to withdraw this proposed policy,” the scientists wrote.

“We also ask our elected representatives to oppose its implementation, as it would cause grave harm to transgender and intersex Americans and weaken the constitutional rights of all Americans.

“Transgender and intersex people deserve equal access to the rights, livelihoods, liberties, and dignity to which we are all entitled on the basis of our shared humanity.”

But even with this growing backlash against the memo, Trump has claimed that the memo is to “protect” the country. According to Reuters, when Trump was asked about LGBTQ rights, he said: “I’m protecting everybody. I want to protect our country.”