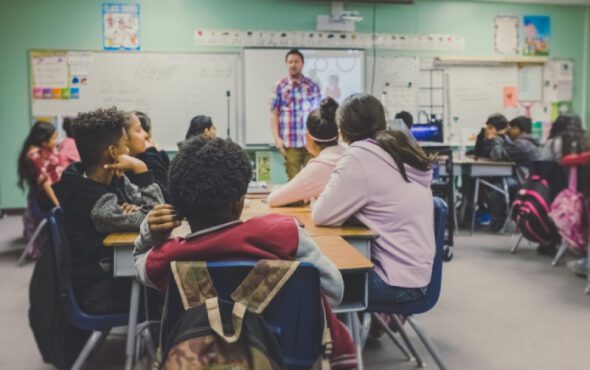 Research has revealed that one in five teachers are still uncomfortable discussing LGBTQ+ topics with children in school.

The independent research from LGBTQ+ charity Just Like Us comes on the 18th anniversary of Section 28’s repeal in England and Wales on 18 November 2003.

More than 6,000 teachers were surveyed across primary and secondary schools, with 3% stating that they are “completely uncomfortable” discussing such topics with students.

Just 29% of respondents say they are “completely comfortable” with educating pupils on LGBTQ+ topics, despite the latest government guidance requiring inclusive education.

Primary school teachers are less comfortable discussing these issues, with just 25% being “completely comfortable” and 19% being uncomfortable.

Just Like Us asked teachers: ‘How comfortable do you feel discussing LGBT+ (lesbian, gay, bisexual and transgender) topics with your pupils?’ and the results are as follows:

Dominic Arnall, Chief Executive of Just Like Us, says the findings show that “growing up LGBT+ is still unacceptably tough.”

“We don’t blame teachers for feeling uncomfortable – they may not have had the resources or personal life experiences – but all you need is a willingness to support your pupils and Just Like Us can help provide lesson plans, assemblies, talks and training so that you feel confident discussing LGBT+ topics with your pupils,” he continues.

One London teacher who asked to remain anonymous said: “As a primary school teacher and a gay person, I have never felt very comfortable talking about LGBT+ inclusion in school because I’ve feared parents’ negative responses.

“Many teachers I know share these concerns, however, I think that as a member of the LGBT+ community myself, these feelings are heightened because it is personal. I’ve been lucky to work in a school where I could be out to my colleagues but I never came out to my students and very rarely came out to parents over fears of backlash – despite LGBT+ families, such as some children having lesbian mums, being in the primary school curriculum. Where my straight colleagues could talk about their partners easily, even if it was a casual pronoun, this was something that I couldn’t do.

“There is an overwhelming false belief that to talk about LGBT+ people or families would be to talk about sex. In reality, being LGBT+ inclusive is actually most commonly about explaining that there are different types of families, such as gay dads, wellbeing and allyship.

“The idea that we don’t talk about any relationships with children is false. As early as nursery and reception, children hear about heterosexual relationships in books and play at being a heterosexual family in the home corner. They are constantly bombarded with cisgender, heterosexual people, and pupils should be learning that LGBT+ people simply exist.”

The survey was commissioned by Just Like Us and carried out independently by Teacher Tapp surveyed 6,179 primary and secondary school teachers across the UK.

Only 29% of teachers say they're 'completely comfortable' discussing LGBT+ topics with their pupils, our new independent research of more than 6,000 UK teachers has found.