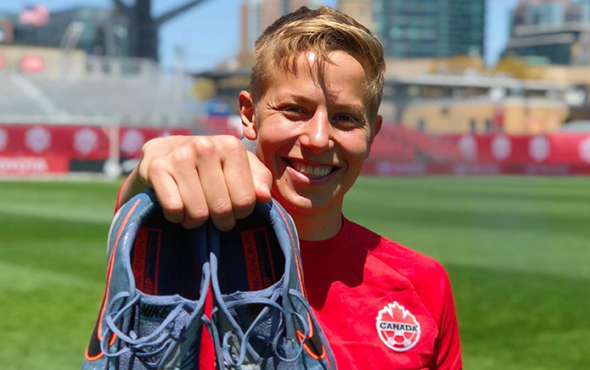 Quinn has come out as transgender.

In a powerful statement posted to social media, the international Canadian footballer revealed to fans that they had been living as trans for “years”.

“Coming out is HARD (and kinda bs),” Quinn wrote. “I know for me it’s something I’ll be doing over again for the rest of my life. As I’ve lived as an openly trans person with the people I love most for many years, I did always wonder when I’d come out publicly.

“Instagram is a weird space. I wanted to encapsulate the feelings I had towards my trans identity in one post but that’s really not why anyone is on here, including myself.

“So INSTEAD I want to be visible to queer folx who don’t see people like them on their feed. I know it saved my life years ago. I want to challenge cis folks (if you don’t know what cis means, that’s probably you!) to be better allies. It’s a process, and i know it won’t be perfect, but if I can encourage you to start then it’s something.”

Quinn – who uses they/them pronouns – is currently on loan from National Women’s Soccer League side OL Reign to Swedish club Vittsjö GIK. Since making the senior squad in 2013, they have earned 57 caps for Canada.

The 25-year-old concluded their post with five simple steps for cisgender people on how to be better allies to the trans and gender non-conforming communities.

Quinn asked fans to put their pronouns in their bios, “follow/listen” to other trans and non-binary voices such as Janet Mock, Ashlee Marie Preston and to “practice using gender neutral pronouns with friends/in a mirror.”

Their fourth and fifth points were to “vote” and “start to catch yourself making assumptions about people in public/bathrooms/any space.”

You can read Quinn’s entire coming out post here or below.