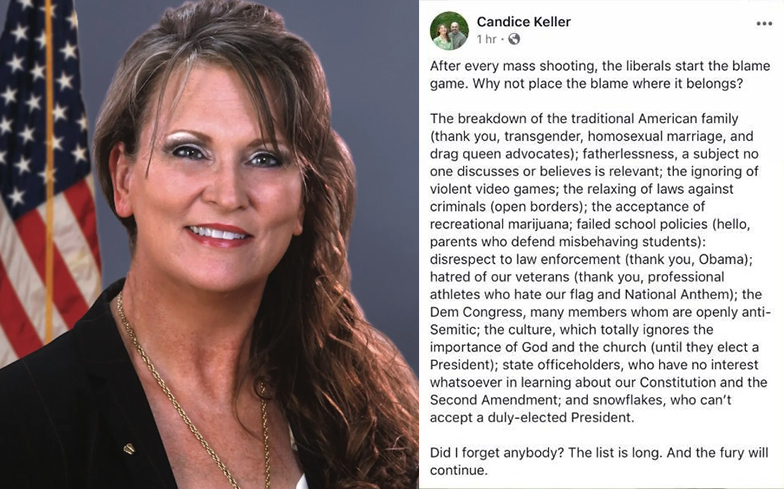 An Ohio lawmaker has blamed recent mass shootings in America on LGBTQ people.

Candice Keller, a Republican state representative from Middletown, is facing backlash after saying everything from gay marriage to Obama are responsible for the weekend’s fatal shootings in Dayton, Ohio and El Paso, Texas.

“After every mass shooting, the liberals start the blame game,” she wrote on Facebook, adding: “Why not place the blame where it belongs?”

So where does the blame belong? Well, according to Keller, it’s all down to “the breakdown of the traditional American family”, which of course is the fault of trans people, same-sex marriage and “drag queen advocates” – whatever that means. In the Facebook post, which had been removed as of early Monday, Keller went on to accuse fatherlessness, video games, open borders, marijuana, Obama, and people who “ignore the importance of God and the church” for causing mass shootings.

She also accused state lawmakers of having “no interest whatsoever in learning about our Constitution and the Second Amendment”, and of course it wouldn’t be a Republican rant without placing some of the blame on “snowflakes”.

Her comments have faced backlash from many, including those in her own party. Jane Timken, chairman of the Ohio Republican Party, told the Washington Post that Keller’s comments were “shocking” and “utterly unjustifiable”.

She even faced criticism from country singer and LGBTQ ally Kacey Musgraves, who delivered the perfect takedown of the lawmaker’s ridiculous Facebook post.

“Is that a terrible brow bone highlight or is she herself a crusty drag queen?” Musgraves replied to a photo of Keller.