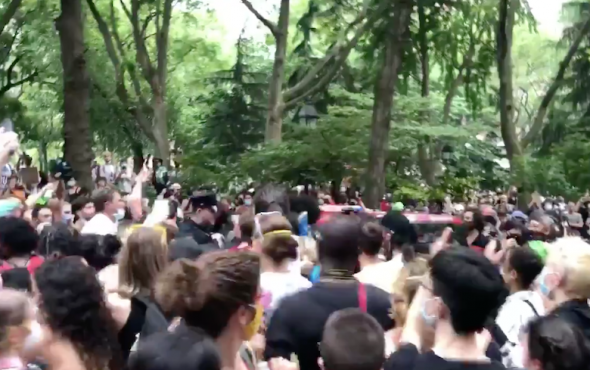 The peaceful protest, which started around 1pm, descended into chaos after officers attempted to arrest two people for graffiti. Numerous videos on social media show the NYPD using their batons and tear gas on protestors as they intervened.

Amber Hikes, the Chief Equity and Inclusion Officer for the American Civil Liberties Union, and a founder of the eight-stripe Pride flag, told her followers on live-stream: “We got to Washington Square park and the cops fucking ambushed us.

“They ran in with bikes, motorcycles and tear gas. They’re trying to arrest peaceful protestors and we’re standing with them.”

Four people were arrested and 10 others were pepper sprayed, including someone who was running a fruit stand.

“We were dancing right in front of the arch on 5th ave and out of nowhere, cops started storming into the crowd,” a witness told The Gothamist. “They pushed everyone in front of them out of the way and onto the ground.

“They pushed a reporter who was taking photos and started randomly pepper spraying people. I couldn’t see anyone instigating. It seemed like they felt out numbered after entering a huge group and panicked and started beating people up.”

Pippa Bianco, a volunteer with NourishNYC who was helping protestors with food and water supplies, said the NYPD “started the violence” and revealed that she was held down by officers as she watched three others get sprayed with tear gas.

She also witnessed a police medic assisting two other officers who were accidentally sprayed in the eyes.

“The man who was arrested was crying and saying he was hurting and the cops were dragging him by his hands so his weight was against his shoulders pulling [on] the sockets,” added Bianco.

Another witness who live-streamed the march on Facebook said the “NYPD is going ballistic” and compared it to the Stonewall Uprising of 1969, saying it was “at a point where this was almost Stonewall 2.”

“There was an excessive amount of police once the march got here,” he said. “If it wasn’t for that things wouldn’t have escalated to the point they did.”

The Reclaim Pride Coalition, who led the march, said in a tweet that their livestream “ended early because the NYPD began pepper spraying, making arrests, and using force,” and urged protestors to be safe.

UPDATE: Our livestream ended early because the NYPD began pepper spraying, making arrests, and using force. We are carefully monitoring the situation. Please keep each other safe!