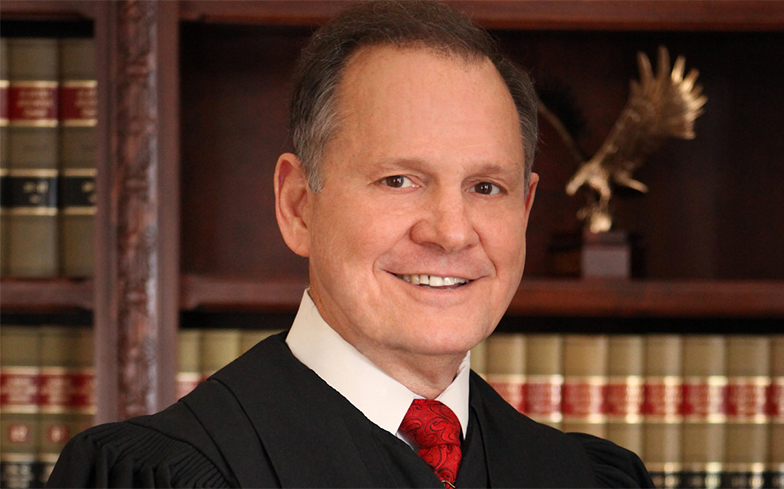 Proof that being a bigot doesn’t pay.

Notorious homophobe and accused child molester Roy Moore was beaten in this week’s Alabama senate election by Doug Jones, who becomes the state’s first Democratic senator since the 1990s.

The election was called after Republican Jeff Sessions, who’s also known for his bigotry, stepped down to become US attorney general.

Many expected Moore to come out on top, given that the overwhelmingly conservative state voted for Donald Trump by more than a two-to-one margin over Hillary Clinton in the 2016 presidential election.

Jones will now serve until January 2021.

“On a very personal level, I want to thank each of you for fulfilling a lifelong dream to serve in the U.S Senate.

We have work to do in this state.

Thank you all, god bless you.”

Moore has consistently caused controversy for his questionable views – earlier this year it was unearthed that Moore had once compared sex between two consenting adults of the same sex to bestiality during a 2005 interview.

Moore also faced several scandals throughout his now-defunct senate campaign, including multiple allegations of sexual assault and claims that he dated teenage girls – one as young as 14 – while he was in is 30s, which no doubt affected his votes.

Chad Griffin, the President of the Human Rights Campaign, celebrated Moore’s “monumental” defeat and praised Jones for his win.

“Tonight, in rejecting avowed bigot Roy Moore, Alabama voters solidified once and for all that attacking and demonising the LGBTQ community is a sure-fire way to get yourself beaten on Election Day,” he said.

“Doug Jones’ victory in Alabama is monumental, and was made possible by the overwhelming and unprecedented, grassroots resistance of ordinary Alabamians against the politics of hate and division.

“The American people will no longer tolerate discrimination against their family, friends and neighbours.”

Meanwhile, President Trump – who supported Moore’s bid for senate despite the accusations against him – also congratulated Jones on his “hard fought” victory, proclaiming on Twitter: “A win is a win.”