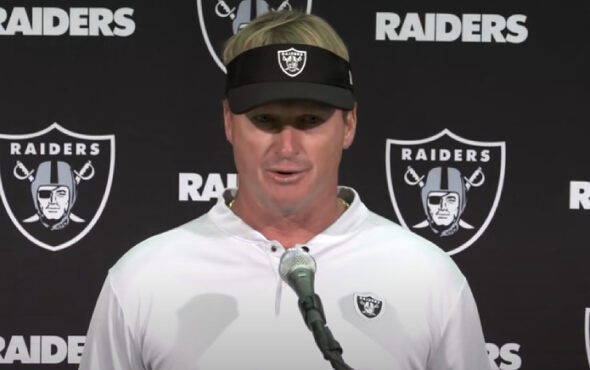 Jon Gruden has resigned as head coach of the Las Vegas Raiders after details emerged of emails in which he made homophobic, racist and misogynistic language.

“I have resigned as Head Coach of the Las Vegas Raiders,” he wrote on Twitter in a statement issued by the team. “I love the Raiders and do not want to be a distraction. Thank you to all the players, coaches, staff, and fans of Raider Nation. I’m sorry, I never meant to hurt anyone.”

Mark Davis, the owner of the Raiders, has accepted his resignation. The team’s special coordinator, Rich Bisaccia, has since been elevated to interim head coach.

On Monday (11 October), the New York Times reported that Gruden had frequently sent emails with homophobic, racist and misogynistic rhetoric over several years to Bruce Allen, the former president of the Washington Football Team, and others, while he worked as a colour analyst for ESPN.

Although he wasn’t employed by the Raiders at the time, Gruden was revered in the industry thanks to his Super Bowl win in 2003 with the Tampa Bay Buccaneers.

In the emails, Gruden described the league’s commissioner Roger Goodell as a “faggot” and a “clueless anti football pussy” and said he shouldn’t have influenced then-coach of the Rams, Jeff Fisher, to “draft queers” – referencing Michael Sam, a gay player chosen by the team in 2014.

The Times said he denounced women being employed as on-field officials, as well as tolerance for national anthem protestors.

Gruden also hit out at President Obama and then-Vice President Joe Biden during the former’s re-election campaign in 2012. He called the latter a “nervous clueless pussy” and reportedly used similar language to describe Goodell and DeMaurice Smith, the executive director of the NFL Players Association.

Gruden was already being investigated by the league for using racist terms to describe Smith in an email he wrote to Allen in 2011.

“I think the next step that the league needs to take is being proactive in making sure that the coaches that they hire, the players that they draft, the organization that they form are being inclusive, are being supportive and are held to that standard not when things come to light but all the time,” he said on Tuesday.

“That’s accountability, doing the right thing when no one is looking. The integrity level is what is being challenged here.”

"I have resigned as Head Coach of the Las Vegas Raiders. I love the Raiders and do not want to be a distraction. Thank you to all the players, coaches, staff, and fans of Raider Nation. I’m sorry, I never meant to hurt anyone."

Russell also addressed Gruden’s statement, which was widely criticised on social media for failing to cover all of the topics in his emails.

With Gruden losing credibility amongst the team, NFL reporter Ian Rapoport said Gruden’s resignation is for the best. He also pointed out how the team boasts Carl Nassib, who recently made history as the first active NFL player to come out as gay.

“How would Jon Gruden, after sending that homophobic email, with players knowing that’s what he really thinks, how would he stand up in the middle of the room and lead this group of men with several people in that locker room knowing that, privately, he makes fun of them or is against them?” he said.

“This is a man, who publicly was one thing — he seemed to be a kind of jovial, kooky leader — these emails obviously uncover the real thoughts of Jon Gruden. I think there are a lot of people wondering — players, executives of color, many whom I spoke to last night, coaches of color, or just humans — just wondering if this person is going to get what he deserves.

“Is there going to be accountability? Are you just allowed to do this? I think when John Gurden resigned, several of the people I spoke with simply said, ‘OK good, this is what it should be.'”