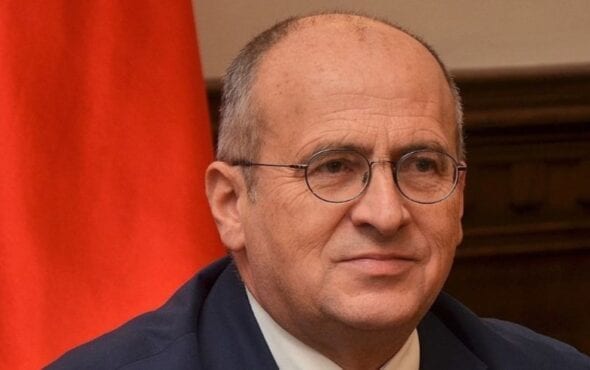 Zbigniew Rau is very outspoken with his homophobic views.

Poland is experiencing a massive wave of homophobia at the moment, enabled by its President, Andrzej Duda, who made opposition to LGBTQ+ rights a key plank of his re-election campaign.

This has led to many queer people fleeing the country for their safety.

And a new political appointment is unlikely to help matters, as on Thursday (20 August), the Polish Prime Minister, Mateusz Moraweicki appointed Zbigniew Rau as the Minister of Foreign Affairs.

It’s possible that Rau might be even more homophobic than Duda, having previously grossly linked “LGBT ideology” to a “civilisation of death” that included things like zoophilia, paedophilia and cannibalism. Yes, this really is as insane as it sounds.

In social media posts, he claimed that Western countries had legalised zoophilia in the 1960s, were suggesting the legalisation of paedophilia and that scientists in Sweden were attempting to legalise cannibalism, in order to fight climate change.

“There is no sanctity for Western ‘spokesmen’ of modernity,” he wrote. “Their barbaric actions lead directly to a truly hellish ‘civilization of death’ against which St. John Paul II tried to warn us.”

Rau also wrote that “under the guise of a fight for tolerance and calls for acceptance of sexual differences, there is a ruthless fight to undermine the fundamental values ​​of our civilisation.”

He added: “Of course, the almost overt attempts of the LGBT lobby and various ‘educators’ trying to break into Polish schools should be particularly disturbing.

“The ideological storm we are witnessing requires a response. But we must equip ourselves with a shield that will protect the rights of parents and children, Christian values ​​and lifestyle.” In another bizarre rant, Rau tried claiming that preventing same-sex couples from adopting children wasn’t homophobic, saying in a long-winded post: “These centres create the impression that they promote openness, tolerance, empathy, and in fact, they present the defence of traditional family values ​​as discrimination, they criticise the desecration of saints for many of us as religious symbols as hate speech, and questioning the postulates of adopting children by homosexual couples as homophobia.”

He added that this was a “radical, revolutionary ideology, the aim of which is social engineering that will destroy the current civilisation order based on the traditional family.”

The rising levels of homophobia in Poland have been widely condemned, and earlier this week a list of writers, actors and directors penned an open letter protesting Poland’s treatment of the LGBTQ+ community.