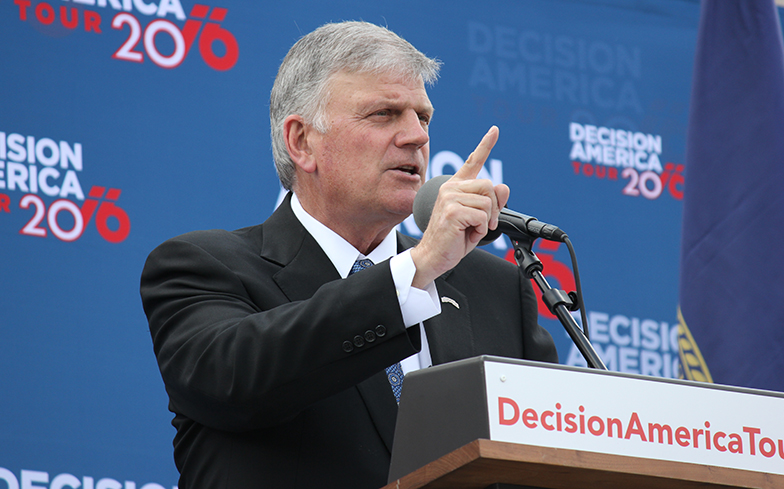 People aren’t happy that Rev. Franklin Graham is coming to the UK.

The American evangelical Christian, who regularly expresses anti-LGBTQ and Islamophobic sentiments, has been invited to speak at the Lancashire Festival of Hope at Blackpool Winter Gardens next September.

But opposition to his planned visit is mounting, as several MPs have now called upon Home Secretary Amber Rudd to refuse Graham entry to the UK, suggesting his views are incompatible with British laws on hate speech.

Paul Maynard, a Blackpool MP and minister at the Department of Transport, has written to Rudd to express his concerns over the visit, while another Blackpool MP Gordon Marsden said Graham’s views are “incompatible” with the Bible’s teachings.

“I think frankly the evidence is piling up that his visit to the UK … would not be a good thing and not probably in my view a very Christian thing,” Marsden told BBC Radio Lancashire on Monday.

A petition to deny Graham a visa started by Nina Parker, the pastor of Liberty Church in Blackpool, has received over 6,500 signatures.

“As a Christian and as a leader of a church that particularly welcomes LGBT people, I’m horrified that other local churches are inviting someone with this record of hate speech,” Parker said, adding that his visit would be “extremely destructive”.

Graham previously claimed the Obama administration were pushing “a gay and lesbian agenda”, and accused them of “flaunting sin” with a monument dedicated to the people who fought for equality in the Stonewall Riots.

In 2015, he thanked Russian President Vladimir Putin for “protecting young people against homosexual propaganda” and accused same-sex couples of “taking” other people’s children.

Blackpool vicars Andrew Sage and Tracy Charnock have penned an open letter to the bishop of Blackburn, Julian Henderson, calling on him to distance himself from Graham and his controversial views.

“I have good relations with Muslims and gay people in my parish, and everyone is welcome at the church where I’m the parish priest,” Sage told The Guardian.

“This [invitation] is not in my name, and I’d like the bishop to distance himself from it.”