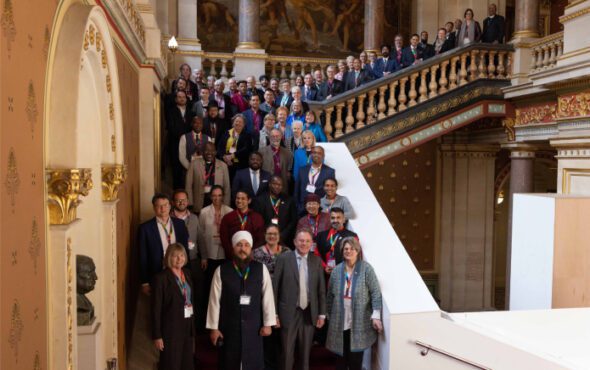 Six key safeguarding principles for LGBTQ+ people have been agreed on by more than 150 senior religious leaders, academics and lay leaders from all over the world.

The officials met at the 2022 Global Interfaith Commission (GIC) on LGBTQ+ Lives on 21 and 22 March to agree on measures that will protect queer people who often experience discrimination by their religious communities.

Sponsored by the Foreign, Commonwealth & Development Office (FCDO), the event saw the likes of the Anglican Archbishop of Canada, the Chief Rabbi of Poland and the former President of Ireland, Dr Mary McAleese in attendance, among others.

Specially commissioned research into how harmful so-called ‘conversion therapy’ is was discussed, which highlighted how the practice has led to higher suicide rates among those who undergo it.

A total of six safeguarding principles (empowerment, prevention, proportionality, protection, partnership and accountability) were agreed on and are based on those set out in the UK Care Act 2014.

Under the measures, the delegates agreed that everyone “should be free to live a life of dignity, consistent with their sexuality and gender identity within their faith communities without fear or judgement.”

MOMENTOUS – senior religious leaders from around the world agreed & committed to these 6 #Safeguarding Principles to #Protect #LGBT+ Lives yesterday…! pic.twitter.com/HWJD42On0J

“We recognise that many LGBTQ+ people face significant discrimination, rejection, and hatred, and so we commit to work to protect all LGBTQ+ people from harm, wherever it occurs in both religious and secular contexts,” the ‘Protection’ principle states.

Those in attendance were united in their commitment to having “a duty of care towards all LGBTQ+ people” and recognised that the community has often been “ignored and side-lined” by society.

Delegates committed to the safeguarding principles during an Act of Celebration at Church House, which was led by the Dean of St Paul’s, the Very Revd David Ison.

“It is so encouraging to see the importance that so many senior faith leaders from around the world have placed on this event, with many clearing their diaries and coming to London to show their solidarity and support for this critical Safeguarding project,” said Jayne Ozanne, the organiser of the delegation and Director of the GIC.

“For too long many innocent people have been left totally undefended, with no one to turn to for help,” added Anglican Bishop Paul Bayes, the GIC’s co-chair. “We are now uniting to champion their cause and ensure that this abuse, which has gone on for far too long, stops.”

More information about the safeguarding principles can be found here.

BREAKING NEWS – Tomorrow we gather over 150 religious leaders, academics & lay leaders from around the world, with help of @FCDOGovUK, to agree some #Safeguarding Principles to Protect #LGBT+ Lives.