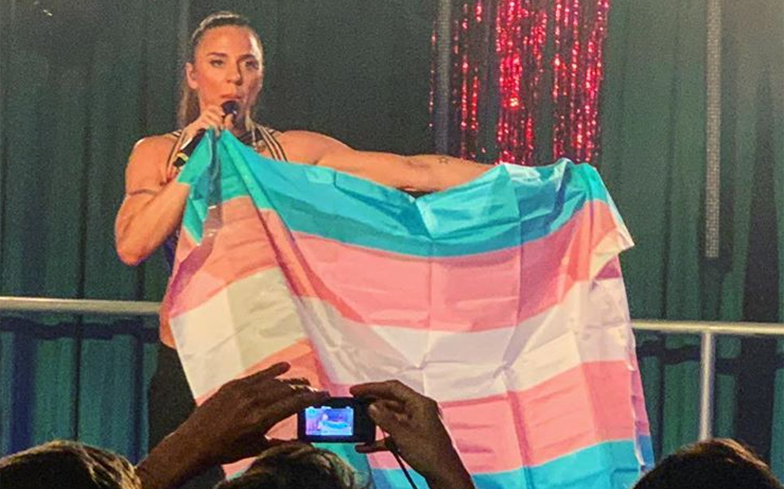 During a performance at Brighton’s Pride Pleasure Gardens earlier this year, the Spice Girls singer took to the stage with a Trans Pride flag wrapped around her and spoke about the importance of supporting the trans community.

“This is a flag that we probably don’t see often enough, and this is a flag we all want to see a lot more of,” she told the crowd, before launching into a performance of number one hit 2 Become 1.

“I didn’t even know the trans and non-binary community had a flag,” she revealed to Vice, explaining that she was introduced to it by Margo Marshall, a non-binary member of drag collective Sink The Pink.

“I have friends with children and some of them are questioning whether they’ve been born in the right body,” she said.

“Young people know immediately. As soon as they’re able to express that, they need support systems put in place that families can go to.

“They always say, ‘It’s a phase and they’ll grow out of it.’ You know what, maybe some of the children will, but some of them won’t.

“It’s a very sensitive subject, but it’s something that I think needs to get more acknowledgement.”

When asked why she thinks so many people in the UK struggle to accept trans people, Mel said she believes it’s down to “fear” above anything else.

“It’s this social thing; it’s tradition and it’s gone through families. It’s this fear and ignorance… All these things, they all come from fear and just not knowing. Fundamentally, that’s where the problem lies,” she explained.

“But if you get to know these people, it dissipates because you think, ‘God, they’re just people too.’ We’re all just people, we all just want the same things.

“That’s one of the reasons why I feel very lucky – not everybody has the opportunity to really spend time with people in the trans and non-binary community.”

Mel has spent the summer performing at Pride events and festivals around the world with drag troupe Sink The Pink, and even performed a surprise duet with drag superstar Courtney Act in New York City.