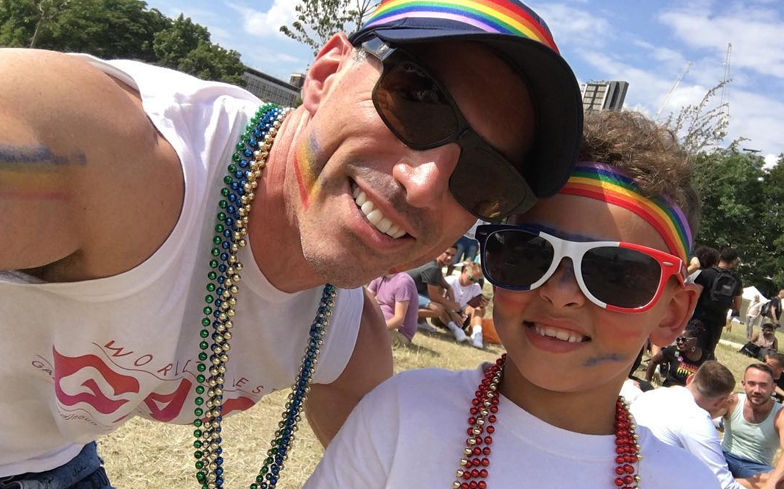 Tuvia Borok has a successful career in the City, but after his marriage ended to his ex-husband, he now raises the son he adopted back in 2013 on his own.

“From a very young age, I always wanted to have a family and raise kids,” he told The Independent. “Whilst I have a small immediate family with only one younger brother, I grew up surrounded by lots of cousins and my parents instilled a strong sense of family into us.”

According to recent statistics, more and more LGBTQ parents are adopting children and starting their own families.

It means that will more LGBTQ parents out there, special support systems need to be put in place. Tuvia recognised that and co-founded The P3 Network, which focuses on supporting prospective and actual LGBTQ parents in the UK.

When it comes to raising his own son, Tuvia says he is very open with him about the subject of his child having a gay dad.

“Hiding it would send a message to my son (and others) that it is something to be ashamed of,” Tuvia said. “I’ve also armed him with language so that no one could use the word ‘gay’ or ‘LGBT’ to hurt him. He doesn’t see ‘gay’ as a negative term – to him it’s just an adjective that happens to describe his family and my (and many other people’s) sexuality.

“I love hearing him educate bullies who try to use ‘gay’ in a derogatory way. He’s my little diversity champion! With other children, I’ve always taken the same blunt approach, sometimes to the dismay of parents who think me saying my son doesn’t have a mother means I am introducing sex-ed into their lives. There is nothing taboo about same-sex parenting.”

Tuvia’s position as CEO of The P3 Network has earmarked him as an activist in the community, but that’s not necessarily how he sees himself.

“Activism can mean different things to different people. To me, it’s as basic as doing something with the aim to effect change,” he said. “Being a visible gay parent for me is about being a role model – I prefer the term advocate over activist.

Related: 6 game-changing laws that have transformed the LGBTQ community

“Being a role model is important for two reasons – first, to help those within our own community see that it is possible to achieve, and not feel isolated in pursuing their dreams. Second, to help educate the non-LGBT community about the fact that being a gay parent is no different to being a straight parent.

“A lot of my own community still doesn’t understand why a gay person would want to be a parent. With this in mind that I co-founded The P3 Network. It filled a void, and four years in, we support some 2000 LGBTQ families and prospective families in London alone, and work with close to 70 multinationals and UK government agencies in supporting a more inclusive LGBTQ family agenda.”

As for navigating the dating world as a single gay parent, Tuvia found it difficult at first as he simple didn’t have the opportunity to meet like-minded men.

“I was off the market for a decade, having been married to a guy for many years,” he explained. “So, not only did I need to navigate dating as a gay parent but also as a gay divorcee.

“I don’t have time to go to bars and I don’t meet people at work, or through my volunteering, which means I need to turn to apps. Until recently, the only apps out there were very one-dimensional.

“It was only when Chappy came to market, that I found I could possibly connect with a guy who was focussed on a real relationship, and who himself was multi-faceted. I refuse to feel ashamed of my family values and an app like Chappy allows a guy like me to potentially meet an awesome guy who will want to come on this journey with me, and hopefully, eventually, my son too.”