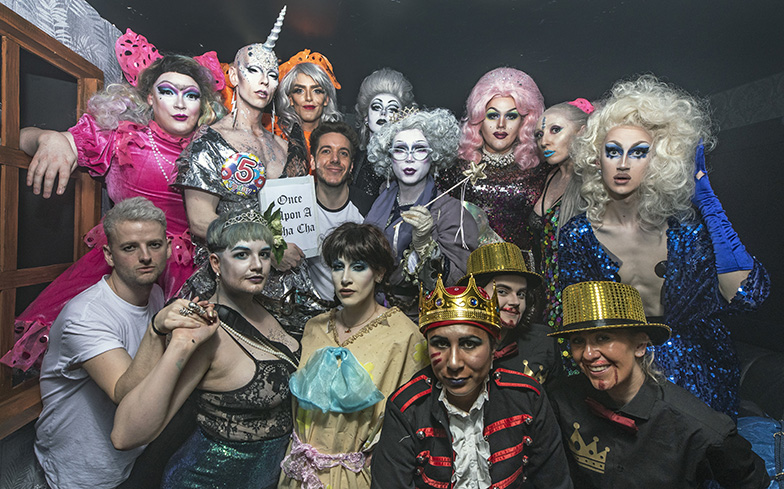 In case you haven’t heard, Donald Trump is planning an official visit to the UK later this year.

After months of state visit attempts thwarted by the threat of protest, the President of the United States will finally set foot on UK soil on 13 July as he makes a one-day “working trip” stripped of the usual fanfare that a world leader would expect.

While Trump will supposedly be meeting the Queen of England during his visit, one queen who’s not bowing down is Cheddar Gorgeous, who’ll be on the front lines with some of the country’s most fierce drag performers to greet the US President.

Alongside a Together Against Trump protest, which has seen over 100,000 people register their interest, Cheddar and a host of other queer performers will be hosting their own protest to highlight the poor treatment of LGBTQ people by Trump’s government.

Joining this march will be the incredible team behind the London LGBTQ Community Centre, who recently smashed their £100k fundraising target. Find out more about their event here.

Related: Here’s how you can help fund a much needed LGBTQ Community Centre in London

Gay Times had a chat with Cheddar Gorgeous to find out where the inspiration for the drag protest came from, why queens and kings have always been the perfect spokespeople for change, and how you can help push back against bigotry too.

Why did you decide to bring together this protest against Trump?
I think LGBTQ people in the UK feel a connection, and therefore a responsibility, to the people who we share something with in the United States. I think if we look at the situation in the US right now, with an attempt to reinstate a ban on transgender people in the military, and gutting the rights of transgender students and workers with things like bathroom rights, and attempts to repeal the equal marriage bill, and also the strategic moving of openly homophobic people into positions of power, there’s that entire argument of standing in solidarity with queer people in the States. But in addition to that, and probably elevated beyond that, is actually standing with other people on other issues – so issues around race and gender, and being able to speak up around his attitudes towards migration, and of course his attitudes towards climate change. I think it’s really, really important to stand with other people who also feel marginalised by what he’s doing and what he represents.

Have you faced any backlash over your plans?
One of the critiques of what we’re doing seems to be, ‘Why him? When there are much worse examples of the way queer people are treated around the world?’ But ultimately, it really comes down to the fact that we are dependant on our elected officials to make any kind of change in that area. We can protest and we can shout and we can sign as many online petitions as we want, but ultimately it’s those people who are closest to home – who represent us and our values and our tolerance for other people – that are going to be around those tables, and able to introduce change elsewhere in the world. I also think there’s an issue of slip, where we don’t want to lose what we’ve already gained in the UK and US in regards to equality.

If you could deliver a personal message to Trump, what would that be?
You know what? There’s this notion that people don’t want him to visit, but that is not how I feel at all. I want President Trump to visit, because it’s important to show him the diversity of our community, and for him to see all these different groups of people coming together who under ordinary circumstances wouldn’t normally come together. It’s about showing him that this discrimination is something that a large part of his own nation, and the nations he’s allied with, are not comfortable with. We’re not comfortable with some of the sacrifices he’s making to stay in power. It’s a difficult one, because a lot of the spectacular stuff around him actually hides the more insidious legal changes he’s making, and the economics that he stands for as well. Drag has become almost mainstream now, largely in part to the success of RuPaul’s Drag Race. Do you think drag artists have a responsibility to be activists? Or can drag just be entertainment?
I wouldn’t call it a responsibility, because that’s a very heavy burden to place on people who might not want that. But what you can certainly say is that, as people who put themselves forward in an extravagant way, drag queens have historically been in positions that are quite good to speak from, especially when you look at the roles they’ve played in social movements, and even in an everyday way. There’s something quite powerful about the way we do that, which makes our differences really overt. Whether you are a biological woman, or a biological man, or a trans person doing drag – because I embrace all different forms of drag – and whether you are doing drag that is about gender transformation, or about becoming a monster, or whatever your thing is, what you are definitely doing is drawing attention to yourself, and what that allows you to do is to be heard, and to be seen. So while I wouldn’t want to think there’s a burden of responsibility on drag artists, they are in a pretty good place to be able to speak out.

What are you hoping Trump will think when he sees all these drag queens together protesting?
I don’t know whether he’ll care, but in terms of drawing attention to the issue I think it helps. Anything that encourages people to talk and have a debate, or maybe causes a disruption, is helpful. I think quite often when you’re a frustrated person who feels like they’re not being heard, disruption is one of the only options you have, and disruption in itself opens the route to conversation, and eventually to a solution, and I think that’s the key here. It’s less about whether or not he understands, or sees the merit in what we’re doing. It’s a lot less about one man’s opinions or views on what happens, and more about how we can use him to draw attention to the very real issues affecting people, and encourage debate around them.

Do you believe the majority of the UK are against Trump? Because a lot of right-wing people use the argument that there’s a silent majority who actually support his views but are too afraid to speak up…
Well, I know gay people who voted for Trump, so it’s a difficult one. What 2016 revealed, both in the US and here in the UK, is that the world we thought we live in is not the world we actually live in. But if you look at how things work politically, it’s not a large majority, it’s a small majority. We’re talking about half-and-half, there’s a division, there’s uncertainty. I like to think that the views that I have don’t prohibit anyone from living the lives they choose to live, which I think is a pretty cool way to exist. If the people who want to embrace really strong beliefs in whatever direction didn’t then wish to restrict other people from having the same rights that they have – which they’ve often been entitled to since birth, and haven’t had to fight for – then that’s absolutely fine. But that’s not what we’re dealing with. There’s never going to be a peaceful moment where everything is solved. Our society is constantly made up of conflict and debate, and we’ll always have to assert the things that we feel are right. But we have to do it in a way that hopefully convinces other people that we’re right.

As a final question, what can our readers do to push back against bigotry?
I don’t have all the answers on that front, but I think anything that makes people think, and actually causes a little bit of disruption, can help encourage debate, you know? The trick is to try and do it in a way that makes the other person feel heard as well, because that’s the key to understanding any argument, and it’s only in understanding an argument that you can argue against it. And figuring out whether you are right! We live in a liberal, open-minded bubble, so it’s important to be open to talking to people who may not share your views.

You can find out more about about the Drag Protest Against Trump and register your interest here.