Mayor of Ottawa Jim Watson comes out as gay 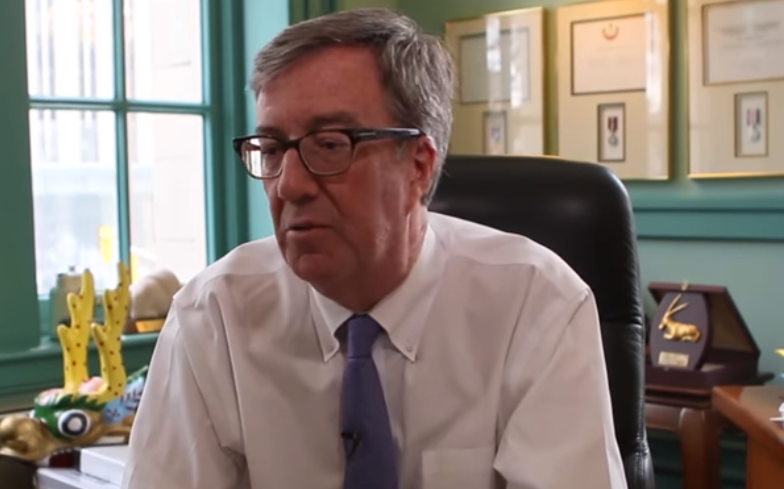 The mayor of the Canadian city of Ottawa, Jim Watson, has come out as gay.

Jim Watson, the mayor of Ottawa has come out as gay, just before Pride celebrations begin in the city.

Writing an op-ed in the Ottawa Citizen, he wrote: “I’m gay, There – I said it; or rather, wrote it. Those two words took me almost four decades to utter, but as they say, ‘Better late than never.'”

Writing about how he came to realise his sexuality, he wrote: “As a grade 7 student, I remember some older boys on my school bus always taunting me and calling me ‘Jim Fairy.’

“And growing up, I was always much more attracted to male TV and movie stars, such as Rob Lowe and Brad Pitt, rather than Julia Roberts or Sharon Stone.”

He added: “Unlike today, back when I was a teenager in the 1970s there were virtually no resources to seek for guidance or help, or just to talk. No LGBTQ clubs or gay-straight alliances.”

Watson recalled how he was too shy to come out during his time in school, and being unable to meet or befriend another LGBTQ student. He also wrote about how even though the people at university had a much more liberal attitude, he still chose to remain in the closet. He then wrote about how in his professional life, his sexuality wasn’t an issue that needed addressing, until a homophobic person at an all-candidates meeting demanded to know if he was gay.

“There were jeers and shouts, and before I could answer, my NDP opponent snapped at the questioner and told them that anyone’s sexual preference had nothing to do with being a good MPP,” he wrote. “To this day, I’m not sure how I would have answered that question, but I am grateful to the NDP’s Marlene Rivier for her gutsy intervention.”

He then wrote: “As I look back over my life, and in hindsight, not coming out sooner was a big mistake on my part. Most of my friends through the years got married and had kids, and they travelled down a separate road filled with family, soccer practices and their careers.

“Most of my friends who are gay are quite open about it, and many are in wonderful relationships or, in several cases, married. That leaves someone like me, who, while closeted, doesn’t fit either of these groups.

“Over the years, I told only two (gay) friends that I was gay, although I suspect most of my family and friends just assumed I was, but respected my privacy and never broached the subject. Over the last few years, I’ve struggled often about whether or not to come out.”

He then wrote about some of the reasons he believed motivated him into coming out. One was when he showed support to LGBTQ athletes competing in Russia by pledging to fly the rainbow flag for the duration of the Winter Olympics.

When one person told him this was a “stupid idea” on Twitter and said he wouldn’t vote for the mayor, Watson hit back saying: “If you have that point of view, I really don’t want your vote.”

Another was when a man approached him saying, “I hope you’re not going in that fag parade” and Watson responded by saying: “I’m looking forward to marching in the Pride Parade, and I plan on doing so again, so why don’t you join me?” Watson said this left the man speechless.

Finishing his piece, Watson wrote: “But if I can be so bold as to offer one bit of advice to those still in the closet: Don’t feel pressured or rushed to come out, but don’t wait 40 years either.

“My reluctance has not allowed me to live my life as full of love and adventure as my gay friends who were bolder and braver than I ever was. So there it is, my coming out story, 40 years in the making.”

Watson has received a lot of support after coming out. Canadian Prime Minister, Justin Trudeau wrote: “Brave words that I’m sure will inspire Ottawans – and all Canadians – to feel free to be themselves. Thank you for sharing your story with us, Jim.”

And one Twitter user, called Rachel Herrera, wrote: “A persons worth is not based on their gender, sexual orientation, race, religion, culture or nationality. I am a proud mother of an openly gay 17 yr old young man. I applaud the fact that you came out. It sets your soul free, & it gives #LGBTQ children the courage too!”