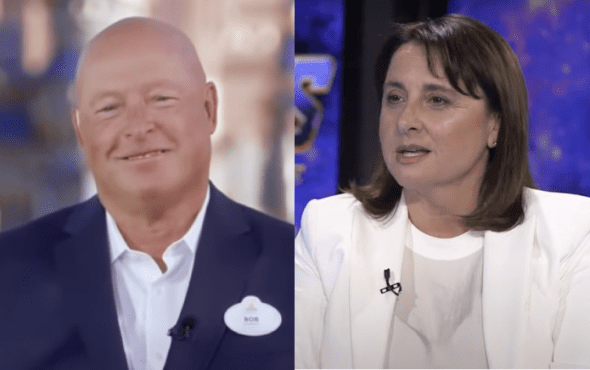 On Saturday (2 April), Alonso disclosed the sentiments of her conversation with the Chapek as she accepted a GLAAD Media Award for Outstanding Film for Eternals in Los Angeles.

The Marvel executive spoke to the LGBTQ+ community and, more widely, called for a “stand” to be taken against “crazy outdated laws”, Deadline reports.

“If you are a member of the LGBTQIA community and you work at the Walt Disney Company, the last two or three weeks have been a sad event. I’ve asked Mr. Chapek for courage in a 45-minute sit-down,” Alonso said, standing next to Eternals director Chloe Zhao and Marvel producer Nate Moore.

She continued: “I asked him to look around and truly if what we sell is entertainment for the family, we don’t choose what family. Family is this entire room. Family is the family in Texas, in Arizona, in Florida, and in my family, in my home. So I ask you again Mr. Chapek: please respect—if we’re selling family—take a stand against all of these crazy outdated laws.

“Take a stand for family. Stop saying that you tolerate us—nobody tolerates me, let me tell you that. You tolerate the heat in Florida, the humidity in Arizona or Florida, and the dryness in Arizona and Texas. And you tolerate a tantrum in a two-year-old. But you don’t tolerate us. We deserve the right to live, love, and have. More importantly, we deserve an origin story.”

Alonso also made a promise to listeners and the LGBTQ+ community: “As long as I am at Marvel Studios, I will fight for representation.”

The ‘Don’t Say Gay‘ bill is formally labelled the Parental Rights in Education bill. In summary, it will restrict “classroom discussion about sexual orientation or gender identity in primary grade levels or in a manner that is not age-appropriate or developmentally appropriate for students.”

Alonso, who identifies as gay, furthered her passionate call for change in a powerful speech outlining how everyday people can help enable change.

“I encourage all of you to stop being silent—silence is death,” she said. “Silence is poison. But if you don’t stand up, if you don’t fight, if you don’t give your money, if you don’t vote, then all we can do is have a party and be gay. Fight, fight, fight! As long as I am at Marvel Studios I will fight for representation for all of us.”

At the event, GLAAD President and CEO Sarah Kate Ellis appealed to the industry and those in the room to help support LGBTQ+ lives, visibility and representation.

“In this moment of crisis, what’s different is our community is holding companies accountable. So I have a message for the industry: Don’t wait until you’re in the hot seat. There’s no more time to sit on the sidelines. We need Hollywood on the front lines, fighting for our rights and telling our stories,” Ellis said.

The GLAAD President called on media platforms and companies to “commit to improving the quantity, quality, and diversity of LGBTQ images – especially in kids and family programming” and to  “speak out against anti-LGBTQ legislation in favor of rights like the Equality Act. I expect every industry executive in this room to join us. GLAAD will give you the playbook. But we won’t give you a pass.”

Notable winners from the 33rd GLAAD Media Awards include Drag Race, Hacks, Marvel’s Eternals, Saved by the Bell and Single All The Way.

Keep reading to find the full list of winners below.