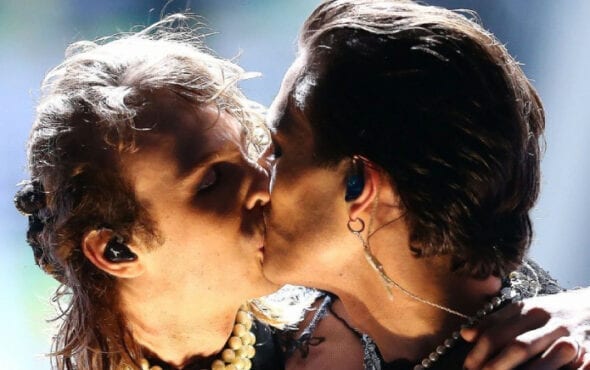 Two male members of Måneskin kissed on stage during their performance at the Polsat SuperHit Festival in Sopot, Poland, to protest the country’s rising homophobia.

After performing their worldwide smash I Wanna Be Your Slave, bandmates Damiano David and Thomas Raggi closed their set with a kiss on the lips.

The band shared the performance to their social media pages alongside Damiano’s statement, to which bass guitarist Victoria De Angelis responded: “We all should be proud of who we are. We love you!”

In recent years, the Polish government has been condemned for targeting sexual minorities and supporting organisations that spread homophobia.

“LGBT-free” zones came to fruition after the country’s ruling Law and Justice Party inspired several towns in Poland to be free from “LGBT ideology” – putting vulnerable LGBTQ+ citizens at risk of discrimination, prejudice and violence.

Fifty countries from around the world subsequently signed an open letter in protest, calling for Poland to “protect all citizens from violence and discrimination and to ensure they enjoy equal opportunities.”

“To this end, and in particular to shield communities in need of protection from verbal and physical abuse and hate speech, we need to jointly work on an environment of non-discrimination, tolerance and mutual acceptance,” the letter reads.

Last year, President Joe Biden spoke out against Poland’s homophobia after quote-tweeting an article from ABC News, in which Ursula von der Leyen – the new head of the European commission – criticised their ruling party for their anti-LGBTQ+ approach to policy and human rights.

“Let me be clear: LGBTQ+ rights are human rights — and “LGBT-free zones” have no place in the European Union or anywhere in the world,” he wrote.

On 19 June, thousands marched in Polish capital Warsaw in protest of rising homophobia.

Poland’s education minister Przemyslaw Czarnek received criticism for his subsequent comments, in which he called people who participate in Pride parades an “insult to public morality”.

Speaking on state-run news channel TVP Info, Czarnek remarked: “You’ve seen the pictures of the so-called Equality Parade, and that has nothing to do with equality. You saw people dressed bizarrely, a man dressed like a woman, are they normal people in your opinion?”

Later, he clarified his comments, saying he was criticising their behaviour and not the marchers themselves. Czarnek continued to hit out at LGBTQ+ progress, however, as he rejected the idea that “inclusive” language should be implemented in schools.

“In Polish schools, the Polish language is obligatory, not any language of inclusiveness,” he said. “In Polish… satisfying sexual desire in a way different from the accepted norm is called perversion and deviation.”

Agnieszka Dziemianowicz-Bak, a lawmaker from the Left grouping, condemned his remarks, stating: “The only language you know is the language of hate. Language that leads to students, who you should be looking out for, killing themselves, self-harming.”