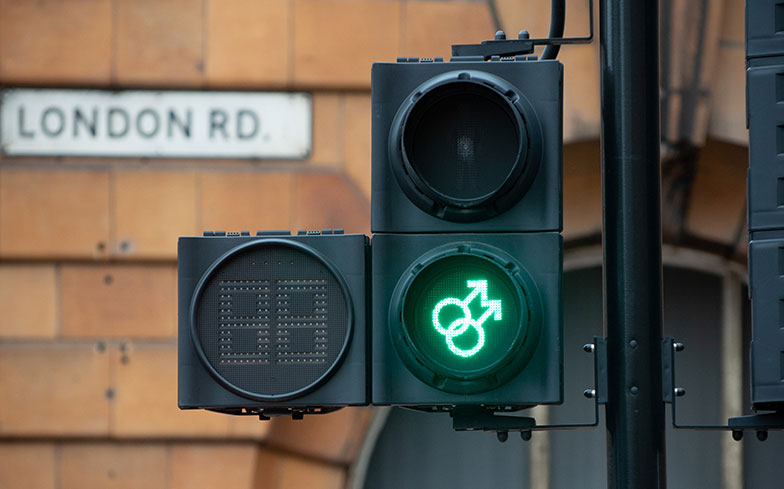 Manchester’s traffic lights are getting a makeover for Pride this weekend.

Ahead of the annual celebrations, which this year takes place from Friday 24 to Monday 27 August, 34 traditional green-man symbols around the city have been changed to ‘diversity’ images by Siemens.

The lights have been erected to represent gay, lesbian, transgender and straight relationships using gender symbols, and were inspired by similar initiatives for Pride in London in 2016 and Bournemouth Pride this year. “As the charity which campaigns for LGBT+ equality all year round in Greater Manchester, we work hard to engage organisations to provide greater visibility. These diversity images on traffic lights do this is a fun and engaging way.”

Juergen Maier, CEO of Siemens UK, who created the new lights free of charge, said the company are “proud” to team up with Transport for Greater Manchester (TfGM) to show their support for Pride.

“Diversity and inclusivity is very important to Siemens, and this is a great example of a simple idea of supporting Pride and getting all people in Manchester to engage in a conversation about LGBT+ inclusion.” As part of Manchester Pride this summer, the city’s Big Weekend billing includes huge chart-topping acts to get the weekend in full swing.

Rita Ora will perform a set of her most popular hits on The Thomas Cook Airlines Stage, while former Scissor Sisters frontman Jake Shears will play classic hits and some new material.

Dance anthem maestro Sigala will get the adrenaline pumping for his set, while Alexandra Burke, Lucy Spraggan, Nadine Coyle, Louise and Sink The Pink will also make appearance across the weekend.

“This year we’ve curated the most eclectic, yet musically credible, line-up The Big Weekend has ever seen,” said Mark Fletcher, Chief Executive for Manchester Pride.

“From international artists like Rita Ora and Jake Shears, to underground stars such as Big Freedia and TCTS, we feel that this is a selection of artists that only Manchester Pride could present. It’s going to be an incredible celebration!”