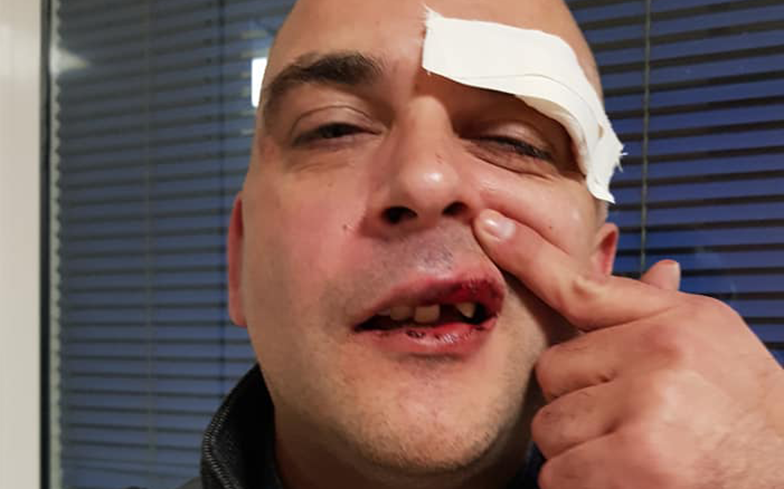 “Despite not being a homosexual, tonight I am proud to “be” one of them.”

A man who was holding a pink dog transporter bag was beaten in Belgrade, Serbia after attackers assumed he was gay.

On Friday (1 November), two homophobic assailants hurled homophobic slurs towards Ilija Vučević while his wife was nearby with their dog. When he challenged them, they knocked out three of his teeth and left him with stitches and several bruises.

After his wife, Marija, intervened, they fled the scene. She then called police and an ambulance.

Ilija uploaded several images of his bloodied face to Facebook alongside the caption: “Tonight I was brutally attacked in the center of Belgrade because two hooligans thought that pink dog transporter bag is a proof that I’m a homosexual.

“Despite not being a homosexual, tonight I am proud to “be” one of them.”

On Sunday, authorities arrested two men on suspicion of the attack. Speaking to Serbian outlet N1, Ilija said: “I hope it will be characterised as a hate crime. Although I do not belong to the LGBT community, I was attacked for it.”

Although same-sex activity is legal in Serbia, and discrimination on the basis of sexual orientation is banned, LGBTQ residents face several legal challenges not experienced by the heterosexual population.

There’s no recognition for same-sex couples or same-sex marriage, same-sex couples are still unable to adopt and conversion therapy is yet to be banned. In 2012, research showed that 48% of Serbians believed homosexuality was still a mental illness.

However, the country made significant progressed in 2017 when they elected Ana Brnabić, their first openly gay – and female – prime minister. She also became the first Serbian Prime Minister to attend a Pride parade.