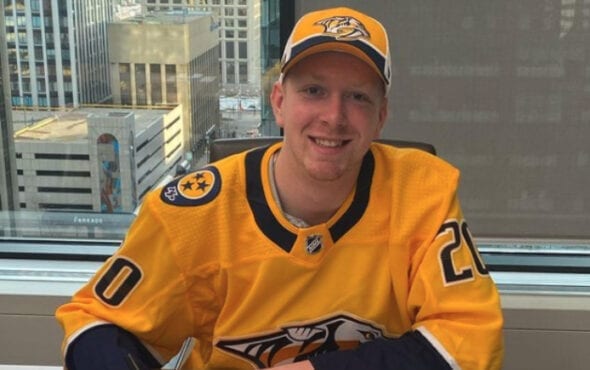 Prokop has now become the first active NHL player to come out as gay.

Taking to Instagram, the 19-year-old athlete opened up about his sexuality with a lengthy statement.

“While the past year and a half has been crazy, it has also given me the chance to find my true self. I am not longer scared to hide who I am. Today I am proud to publicly tell everyone that I am gay,” he began.

“It has been quite the journey to get to this point in my life, but I could not be happier with my decision to come out. From a young age, I have dreamed of being an NHL player, and I believe that living my authentic life will allow me to bring my whole self to the rink and improve my chances of fulfilling my dreams.”

He then goes on to thank his family, agent and friends who showed him “love and support every step of the way.”

“I may be new to the community, but I am eager to learn about the strong and resilient people who came before me and paved the way so I could be more comfortable today,” he said.

“This is just the beginning of my journey and I am excited to see where it takes me, both in hockey and in life.”

Prokop, who is from Edmonton, Alberta, is currently a prospect for the Nashville Predators.

Shortly after his announcement, the team released a statement in support of the young athlete.

“The Nashville Predators organization is proud of Luke for the courage he is displaying in coming out today and we will support him unequivocally in the days, weeks and years to come as he continues to develop as a prospect,” they said.

In an interview with ESPN, the up-and-coming athlete gave more insight into his coming out journey.

“I was lying in bed one night, had just deleted a dating app for the fourth or fifth time, and I was extremely frustrated because I couldn’t be my true self,” he said.

“In that moment I said enough is enough. I’m accepting who I am. I want to live the way I want to and I want to accept myself as a gay man.”

Back in June, Nassib uploaded an Instagram video, where he told his followers he was gay.

“I just wanted to take a quick moment to say that I’m gay. I’ve been meaning to do this for a while now but I finally feel comfortable enough to get it off my chest,” he said.

Looking ahead, Prokop told ESPN that he is more than ready for his future as an out and proud hockey player.

“I’m finally going to be able to breathe and exhale and show the real me,” he exclaimed.

Related: Here are all the celebrities who’ve come out as LGBTQ+ in 2021 (so far).