Locals stand up to preacher ranting about “degenerate” homosexuals 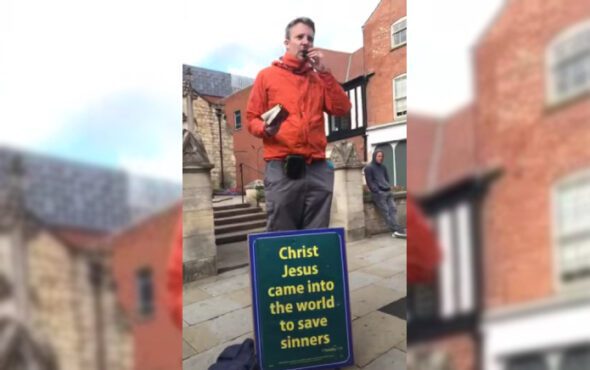 Lincoln locals stood up to a Christian preacher who was ranting about homosexuals being “degenerates” ruining society.

The preacher was standing on Lincoln High Street in front of a sign reading “Christ Jesus came into the world to save sinners” as he spoke into a microphone.

He said homosexuality is a symptom of a “degenerate society” and that gay people are “criminals against God”.

After being asked directly if the preacher thought gay people are sinners, he answered: “Yes, I don’t know how many times I have to tell you this.”

Passers-by immediately called out his words for their ignorance and began to challenge him, something which was caught on camera and uploaded on 4 October.

“How can you trust a book written thousands of years ago when modern times have changed?” one person questioned in reference to the Bible.

“Regardless of change, that’s the problem,” the preacher responded. “Times have changed, we’ve become a perverse and degenerate society.”

Speaking to The Lincolnite, Jimmy Clarke, the first person to challenge the man’s views that day as well as the one who filmed the video, said: “On top of this possibly inspiring hate crimes, this public behaviour also could be the thing stopping teens coming out to their parents.

“Why is this behaviour still allowed to continue in this day and age?”

As reported by The Lincolnite, the Church of England House of Bishops shared their support of gay marriage in 2014.

In a statement, they said: “We believe that Christian understandings of sexuality have a vital contribution to make in our society’s conversation about human flourishing.

“We write as fellow disciples of Jesus Christ who are called to love one another as Christ has loved us. Our vocation as disciples of Christ in God’s world is to hold out the offer of life in all its fullness. God delights always to give good gifts to his children.”

The statement continues: “The proposition that same sex relationships can embody crucial social virtues is not in dispute. Same sex relationships often embody genuine mutuality and fidelity, two of the virtues which the Book of Common Prayer uses to commend marriage. The Church of England seeks to see those virtues maximised in society.”

On 6 September, the Church of Wales voted to allow gay couples to have their civil marriages and unions blessed by a priest.

Despite this, gay couples will still not be able to marry in church, with some LGBTQ+ campaigners describing the move as a “halfway house” in the fight for marriage equality.

According to the Church in Wales, this is “a step on the way towards repentance of a history in the church which has demonised and persecuted gay and lesbian people, forcing them into fear, dishonesty and sometimes even hypocrisy, and which has precluded them from living publicly and honestly lives of committed partnership”.

The move makes the Church of England the only Anglican church in Britain to neither conduct nor bless same-sex unions.