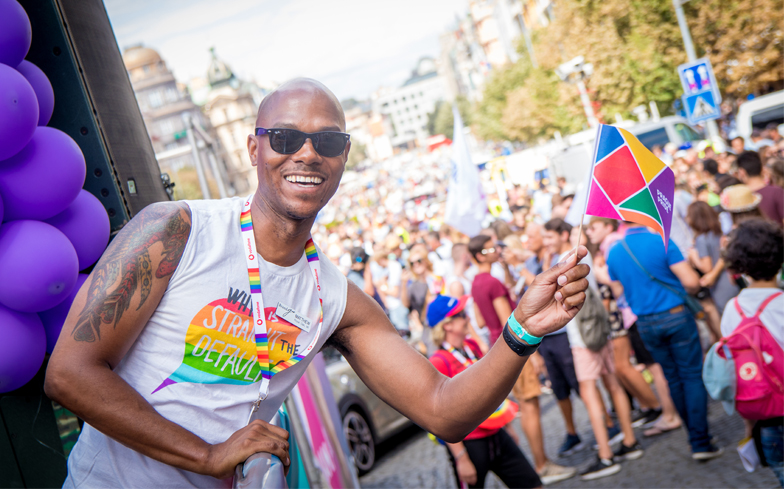 Prague Pride took place from 6 to 12 August and this year I was fortunate to be invited to give two speeches at the festival.

One speech discussed how I reconcile my faith and my sexuality, whilst the second touched on the work that I do as an HIV activist. I was excited to tell my story in a country where the Catholic Church takes a regressive stance on LGBTQ issues. This is particularly the case in Prague, where the Catholic Archbishop is conservative in his views.

My first speech was to the LGBTQ Christian group Logos. The organisation is made up of people from a number of Christian denominations. Here I concentrated on my own journey with faith, before looking at some of the changes which are taking place within the Church of England on LGBTQ inclusion. Afterwards I had conversations with a Baptist Minister, a Norwegian Protestant and many Catholics. It is inspiring that they have been able to establish such a well organised and vocal group. As well as hosting events, networking and providing support to each another, they also engage in pastoral work, reaching out to the entire LGBTQ community. At the Prague Voices event, where I also gave a talk, two of the other speakers discussed their struggles with the Catholic Church. I was saddened by what I heard. Jaro Vinarsky has forged a glowing international career as a dancer. He comes from a very traditional family, who I understood to have a strong sense of faith. Jaro is not fully reconciled with either his faith or his family. He described having a sense of “spirituality”, but has largely rejected Catholicism. He clearly loved his parents and siblings, but admitted that he sometimes found it difficult spending time with them.

At some point during his teenage years he experienced sexual abuse for a year, in the context of an institution. Jaro took his inner turmoil, channelling and transforming it through his artwork. He emphasised that he now has a new family, consisting of the dancers, choreographers and other artists he works with. Faith has mainly been a source of tension in Jaro’s life. Whereas my faith empowers me, I felt that Jaro has become the incredible person he is today despite his faith upbringing.

Gery Keszler, a highly respected HIV activist, also discussed his encounters with the Catholic Church. Austrian society is in some ways very conservative. He has inverted these traditions to create Vienna’s Life Ball, one of the world’s largest HIV fundraisers. Whilst this has been hugely successful, he has come across much resistance and hypocrisy from the Catholic Church. One event he organised was vetoed by a Cardinal and the Church sought to censure an innovative campaign around trans equality and sexual health that he co-ordinated.

The Government of the Czech Republic recently stated its support for equal marriage, but the legislation is not yet on the statute books. The Catholic Church is opposed to the move. The situation is not incomparable to that in the UK leading up to the Marriage (Same-Sex Couples) Act 2013, where most faith leaders within the Church of England opposed equal marriage.

I am a member of two Church of England churches in London where LGBTQ people are an integral part of the congregation and welcomed. This generated a lot of questions in Prague. A number of people said that they found my story inspiring and hopeful, one individual adding that it had encouraged him to re-think his faith in a more positive light, which touched me greatly. I was challenged on the stance the Catholic Church is currently taking towards LGBTQ people in the Czech Republic.

LGBTQ people are allowed to live freely and openly in the Czech Republic, but their rights have come despite persistent resistance from the Catholic Church. In Cuba it has just been announced that their new constitution will include provisions for equal marriage. The most vocal opposition is coming from faith communities, including the Methodist Church, who in the UK are amongst the most inclusive.

My trip to Prague reminded me, once again, that across the Christian denominations, change is taking place slowly and, at best, in a piecemeal way. It is vitally important that LGBTQ Christians ensure their voices are heard, both in the UK and globally.