LGBTQ+ nurse shares shocking results from their fight with coronavirus 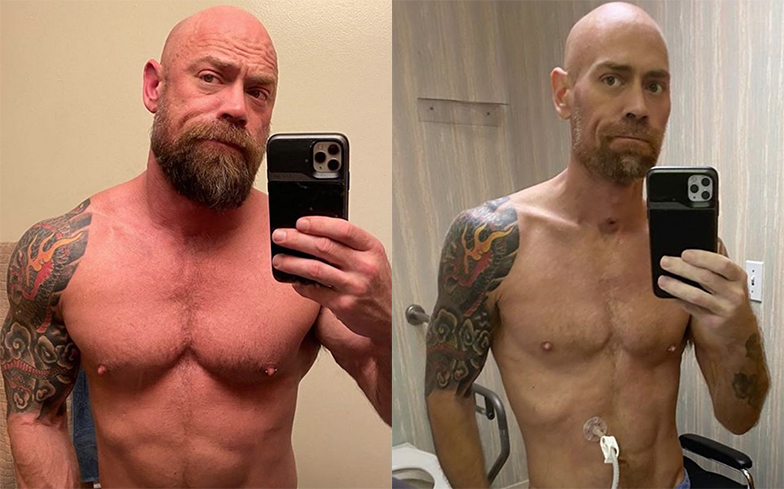 “I wanted to show it can happen to anyone.”

An LGBTQ+ nurse has shared a photo of the shocking toll the coronavirus has had on his body.

San Francisco-based worker Mike Schultz, 43, starting experiencing symptoms of the virus in March, a week after he and his boyfriend, 29-year-old DJ Josh Hebblethwaite, attended the Miami Beach for Winter Party Festival.

Because lockdown and social distancing measures weren’t implemented at the time, the festival brought in thousands of people. 38 people subsequently became sick, and three men have sadly passed away.

“I knew what I thought going in [about the virus]. I didn’t think it was as serious as it was until after things started happening. I thought I was young enough for it not to affect me, and I know a lot of people think that,” Mike told BuzzFeed.

Two after after the festival in Boston, Mike’s fever spiked to 103 and he experienced difficulty breathing. He was immediately rushed to hospital, where they “took him right in” and didn’t let his boyfriend say goodbye.

Mike was given oxygen through his nose, a full face mask and was sedated on his first day there. Four days later, he was transferred to a bigger hospital and Josh was forced to become his medical proxy in case of an emergency.

“There was no one else around, and I would be the one to make decisions for him. It was definitely scary,” said Josh.

Mike was intubated for four and a half weeks. Visits from his boyfriend were prohibited due to the hospital’s protocols to prevent further infection, so Josh called every four hours to tell nurses to pass on the message that he was loved.

“About four weeks in, the nurses were nice enough to FaceTime with him. It was pretty much like he was in a coma. It was definitely scary. But I was so happy to see him at that point,” Josh continued.

After 57 days of battling pneumonia, Mike was released from hospital last week and is now recovering at home with Josh.

“There aren’t enough words to describe how thankful I am for his help, for the support from my family, and for the thoughts and prayers of so many of you. I appreciate all of your kind words,” Mike wrote on Instagram.

“I still have months of recovery ahead of me. So happy I get to spend it with Josh.”

Mike also shared a photo of the shocking effects the coronavirus had on his body, where he went down from 190 pounds to 140.

“Amongst other things, [the disease] reduced my lung capacity with pneumonia. Over 8 weeks I’ve been away from family and friends Getting stronger everyday and working to increase my lung capacity,” he told his 30k followers.

“I’ll get back to where I was in healthier ways this time…. maybe even do cardio.”

Related: There is an emerging humanitarian crisis for LGTBQ+ people due to coronavirus.