LGBTQ+ inclusive lessons are now mandatory in all schools across England 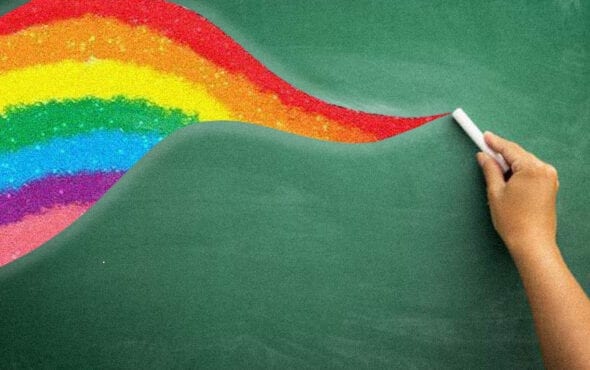 As of this month, all schools in England are required to include LGBTQ+ inclusive lessons.

Some institutions have been granted until Summer 2021 to put the lessons into practice.

The new guidelines state that all pupils need to understand the importance of “equality and respect” and that schools “must ensure that they comply with the relevant provisions of the Equality Act.”

Teachers must be “sensitive and age appropriate” in how they approach LGBTQ+ inclusive curriculum, which needs to be “fully integrated into their programmes of study for this area of the curriculum rather than delivered as a standalone unit or lesson.”

“Schools are free to determine how they do this, and we expect all pupils to have been taught LGBT content at a timely point as part of this area of the curriculum,” it explains further, before saying young people need to understand “human sexuality and to respect themselves and others.”

Sidonie Bertrand-Shelton, the Head of Education Programmes at Stonewall, praised the decision, saying LGBTQ+ inclusive education is about teaching students that “some children have two mums or two dads,” and that learning about different families from a young age “helps create inclusive environments so everyone feels they belong.”

Josh Bradlow, policy manager at Stonewall, said it would have been “life-changing” for him if he received the same education at school.

“This teaching will have just as strong an impact on LGBT people as non-LGBT people,” he explained. “I think this plays a tremendous and decisive role in helping to tackle bullying.”

Earlier this year, it was announced that Scotland will become the first country in the world to add LGBTQ+ history to their school curriculum.

In 2021, all public schools will receive lessons in issues faced by the LGBTQ+ community such as same-sex marriage, same-sex parenting, homophobia, biphobia, transphobia and the HIV and AIDS epidemic.

“Scotland is already considered one of the most progressive countries in Europe for LGBTI [lesbian, gay, bisexual, transgender and intersex] equality,” he said in a statement. “I am delighted to announce we will be the first country in the world to have LGBTI inclusive education embedded within the curriculum.”