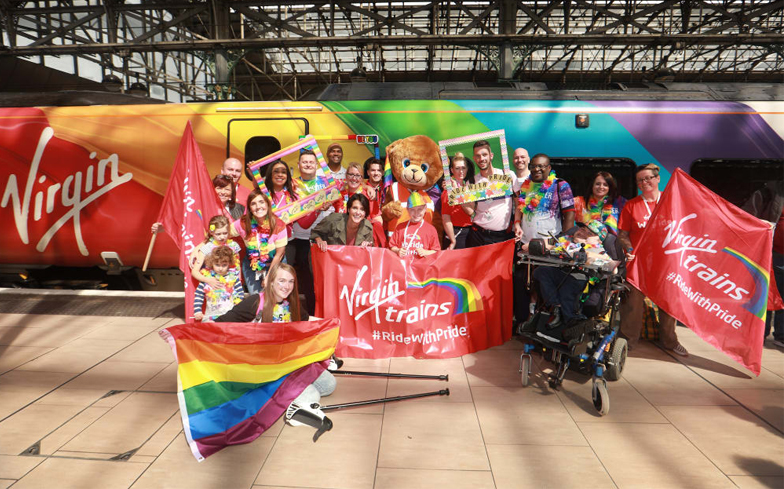 If you’ve travelled by Virgin Trains in the past 18 months, there’s a chance you’ll have been lucky enough to ride their rainbow-coloured Pride Train.

It was the idea of Victoria Whitehouse, who has since become the company’s Inclusion Lead and ensuring that all employees, regardless of their gender identity, sexual orientation, ethnicity, or religious background have the support they need.

“We do recognise that it is a diverse workforce and no two paths to getting to those achievements are the same,” Vic explains to us. “So we celebrate the fact that each of us is unique, and we believe that the difference we all have makes us stronger as a business.”

Here we talk to Vic further about Virgin Trains’ commitment to the LGBTQ community, why companies need to support the community all year round and not just at Pride, and how big organisations can better facilitate the mental health needs of their more vulnerable employees.

What does your role as Inclusion Lead at Virgin Trains entail?
The role was created to lead on inclusion strategy in Virgin Trains. It’s a brand new role that currently sits within the responsible business team. Essentially it’s responsible for supporting and drawing up a strategy so we have an inclusive culture at Virgin Trains. Before the role was created we had lots of people around the organisation that were doing lots of different things – myself included – but our new executive director of HR knew that we needed somebody that actually gave a focus to all the great initiatives people were doing. It’s my dream job, so I’m really fortunate to be doing it.

Why is it so important that big companies like Virgin proactively promote an inclusive working environment?
We’re really proud of our diverse workforce, but we have high expectations of our people. Obviously we want them to work hard and achieve the same goals that the business wants to achieve, but we do recognise that it is a diverse workforce and no two paths to getting to those achievements are the same. So we celebrate the fact that each of us is unique, and we believe that the difference we all have makes us stronger as a business. We’re committed to ensuring that it’s an inclusive place to work. What are the biggest people still face with coming out in the workplace?
We’re really fortunate to be part of the Virgin Group because – certainly from my own personal experience – I came out when I was 18 years old and I was actually working for Virgin Megastores at the time. I’m showing my age a little bit now! I’d never actually come into contact with an openly gay person before at the time, and so it was a real eye-opening experience for me. I already knew at this point that I was a gay woman. So joining an organisation like Virgin, it was absolutely fantastic because I got real support from people. It meant I was able to be who I was in work. At that time we still had Section 28, and there were lots of legal reasons why it wasn’t safe to come out. We certainly weren’t in the place we are now with the Equality Act. The biggest issues people still face is any stigma that might be attached, but I truly believe that at Virgin Trains people are able to be themselves. They are able to come out, and they’ve got a really good network that we’ve set up for LGBTQ people on our Yammer platform. We’ve got several hundred members in that group. It’s become a family. We all talk and then get together at the Pride events and anything else that we might be up to during the course of the year.

It sounds like you’ve had a great experience overall, but has there ever been an instance where you’ve faced discrimination in the workplace yourself in the past?
I haven’t at work, and I haven’t come across it at Virgin. I do think the brand attracts people from the LGBTQ community to come and work for us because they see it as a safe place. In my private life I have come across quite a bit of prejudice – actually from members of my own family. I truly believe that if it hadn’t been for the fact of where I worked at the time, you may not have been speaking to me now. So I’ve got firsthand experience of just how difficult those conversations can be when people come out. Two years ago my partner came out as transgender, female to male. So that’s been an interesting period in my life because we actually went through civil partnership 10 years ago, so I’ve been dealing with that in my personal life as well. So I can truly say that from firsthand experience that that does give me a lot of knowledge and ability to work through any difficulties that people may come up against. I’ve not been exposed to that in my working career.

What kind of mental health support should companies offer employees – especially those who are LGBTQ and are more at risk of suffering from mental health issues?
It’s absolutely essential. We’re proud to be partnered with Rethink Mental Illness as a charity, and we have been breaking down the stigma around mental health since 2015. We’ve actually signed the pledge Time To Change as an organisation. There are members of executive team who have been talking about their personal issues around mental health, as well as members from other teams as well. In terms of LGBTQ people, we do recognised that if somebody requires that support to come out – especially when they are from different ethnic or religious backgrounds – that can be incredibly difficult. So I like to think this is a safe space for them to have those conversations, to share those experiences, and together we can work through some sort of support mechanism for them. We’ve got counselling available for people, we offer an employee support program which is a confidential helpline, and we essentially signpost where they can get support from other LGBTQ services as well. We have a very robust anti-bullying and harassment policy in place. What more needs to be done to make the workplace a truly inclusive environment?
We need to take what we’ve already learned so far and we need to role model the behaviours. It’s about ensuring that everyone feels safe coming to work. I do think that we can do more in terms of promotion of the fact that we stand behind the LGBTQ community. Companies such as ourselves take that incredibly seriously. That’s why we created the Pride Train. The whole idea behind that was a big announcement to the world that Virgin Trains is absolutely committed to LGBTQ people that work for us, as well as our customers. We will support everyone to be who they are.

There’s also currently the whole reform around transgender legislation. We shared our thoughts with Stonewall recently and I actually contacted them in how we can support with that. We’re also partnered with the ENEI, which is the Equality Network. So there’s lots of stuff that we’re doing currently, and I’m going to launch a brand new Inclusion, Diversity and Equality policy next year. With that we’re going to be rolling out some inclusion training. Our people do have inclusion and diversity training, but we’re going above and beyond that and really going to… we know what diversity is, but how do we make it feel like it’s not the PC police and it’s actually, everybody is in this together. We’re all different but it’s about how can we all work together. ‘I’m no different from you,’ is where I’m getting to with that. It’s going to really enhance the work we’ve already done.

I was going to mention the Virgin Pride Train. Why is it important for big companies to be visible during Pride season in support of their LGBTQ employees and the community?
So we’ve been involved in the Pride event since 2015 when we joined Virgin Management. I wanted to do something different with the Pride Train in that we get our customers involved with the experience as well. We have the party on board the train, we make sure we push it out on social media so people can be aware of where the train is going to be. We’ve actually had councils and communities come to us and be like, ‘Why is the Pride Train not coming to our event?’ Which is a nice problem to have. It’s not just about the symbol of the train but what it stands for. It’s our commitment to show that whether you are customer on one of our trains, or you’re coming for a career within the railway industry and working at Virgin Trains, we are absolutely here to make sure everybody feels included.

On the flip side, why is vital that companies don’t limit that support to just Pride every summer and are actually doing LGBTQ activations through the year?
If you pin it all to just one event, it’s okay celebrating just how far we’ve come – and we have come a long way in the last 10-15 years – but there are still pockets within the community where people do find it difficult to come out to their families or get the support required. So it’s important that we take some of that responsibility in terms of providing that safe space. It’s not just a, ‘this is what we’re doing because it’s a nice thing to do,’ I really want our involvement in the Pride events to be a celebration of the hard work that’s gone into the rest of the year. Rather than, ‘Oh that’s over now, let’s move on,’ it’s absolutely engrained in our culture. The LGBTQ community is essential because being a diverse organisation completely makes good business sense. It brings a diverse force and higher performance. Why wouldn’t we do it all year around? That would be my question.