LGBTQ adults are 2.5 times more likely to smoke than our cishet counterparts – but why? 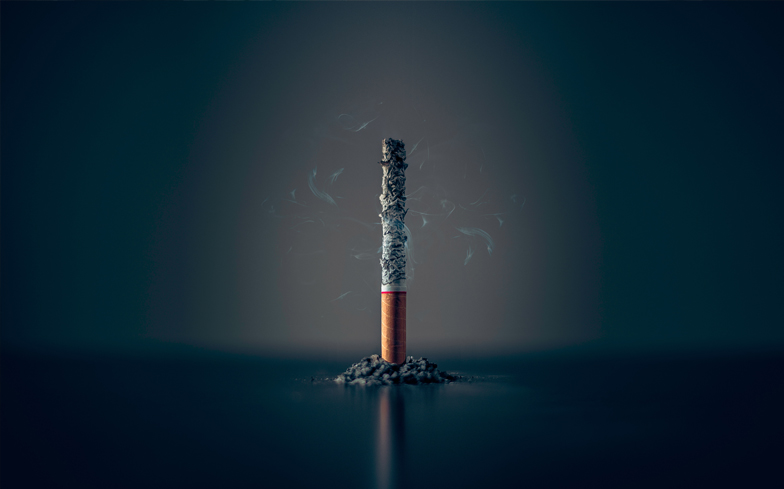 If you’ve ever spent any time scrolling through Gay Twitter, you’ll probably have come across a meme that’s super relatable.

It usually comprises of a GIF or video of people rushing around in a panic, and is captioned with: ‘When you’re in the smoking area at the club and you can hear “I’m so into you, I can barely breathe’ play from inside.”

This song – Into You by Ariana Grande – is perhaps one of the finest specimens in pop music history, so, naturally, whatever you’re doing should be dropped when a banger of that magnitude comes on. But if you’ve found yourself in the smoking area on a night out, fag in hand, the likelihood is that you’ll stay outside puffing away, missing whatever song it is you’ve been waiting to hear all night.

But these aren’t the only reason why gay people smoke. According to a report by Truth Initiative, LGBTQ adults are two-and-a-half times more likely to smoke than our cis, straight counterparts. According to figures by the Office of National Statistics, compiled by the charity Stonewall, one in six LGBTQ people smoke almost every day, with the LGBT Foundation reporting that 24.6% of lesbian and gay people smoke. And as fun as those smoking area breaks on a night out can be, we all know that smoking is, in fact, quite bad for you. In 2016 in the UK alone, there were 77,900 smoking-related deaths. Nevertheless, LGBTQ individuals, especially young lesbian, gay and bisexual people, are more inclined to light one up. As a community, we just can’t stub ’em out. But why do so many queer people smoke?

Growing up in the ‘90s and early ‘00, it was the allure of Dot Cotton, that iconic EastEnders matriarch, sat down the Queen Vic with a pack of fags and a glass of sherry or Bridget Jones and her ciggie-smoking co-dependent coterie of best mates that drew me in. The latter and her modern family truly appealed to an isolated young gay boy at a single-sex school in the suburbs.

Also, and not to be all clichéd “I watched Queer as Folk and wished I was Nathan”, but at 14, I had seen Queer as Folk and I wished I was Nathan. As queer people growing up, we’re not presented with a support network of LGBTQ people who understand what we’re going through. It’s why, when we’re in our 20s, we all have the stunted emotional ages of 15-year-olds; many of us never got the chance to be teenagers.

Instead, gripping a fake ID we venture out to our city or town’s local gay scene, hoping to find those connections that seem to come so easy to our straight friends during countless house parties. These, often very adult, experiences where you find yourself underage surrounded by drinks, drugs, sex and, of course, smoking, mean we’re far more likely to indulge when we’re younger. I remember vividly heading out to gay clubs alone aged 16, pack of cigarettes in hand, knowing that I was far more likely to get picked up if I was standing in outside the smoking area. I was hungry for it.

Of course, this rite of passage, as well as the entire LGBTQ experience, comes with its own unique set of issues. Lesbian, gay, bisexual and transgender people are far more susceptible to mental health problems. According to Stonewall, 52% of LGBTQ people have experienced depression in the last year. This number is higher for trans people (67%). Three in five LGBTQ people have experienced anxiety in the last year. A 2018 study by the British Psychology Society found that nearly 50% of young lesbian, gay and bisexual people aged between 18-25 had experienced suicidal thoughts in the past 12 months.

Growing up LGBTQ can be an incredibly lonely and secluded experience. Without proper support in schools and accurate representation in the media, queer people often feel alone in how they experience the world. Pair this with homophobia, biphobia and transphobia, as well as discrimination and stigma in school, the media and even at home, you’re left with the perfect breeding ground for mental instability. And, as we all know, coming out is a never-ending process, one that occurs for the rest of a queer person’s life.

Likewise, as much as we’d like to say that we’re living in a progressive society, recent data shows that things in the UK are still extremely difficult for LGBTQ. In England and Wales, the amount of homophobic hate crime has more than doubled in the last five years, whereas the number of reported transgender hate crimes has risen by a whopping 81% in the past year. You have to ask: what impact does this trauma have on somebody?

Personally, after a stressful day or during those particularly difficult mental health days where my depression threatened to swallow me whole, smoking felt like a quick way to give myself that good feeling. That initial hit of nicotine, the addictive substance in tobacco, affects the levels of dopamine and noradrenaline in the brain. Basically, it gives you a (brief) rush of pleasure and can reduce stress and anxiety. However, as with any drug, the more you smoke the harder this “high” becomes to replicate, leading you to smoke more and more for the same effect.

What I didn’t know at the time was that said good feeling was a myth. Smoking can actually exacerbate mental health problems. Being addicted to nicotine changes your brain. Withdrawal symptoms are one way to help you feel worse, the body’s need for a dopamine hit causing irritability and even low mood. The short relief from anxiety that smoking provides could also be counter-intuitive as smoking itself and the withdrawal symptoms could be causing said anxiety. In fact, according to the NHS, smokers are actually more likely to develop depression over time as smoking negatively affects the brain’s ability to produce dopamine.

Nevertheless, the rates of smoking among people with mental health issues are significantly higher than the general population. According to the Royal College of Psychiatrists, it’s thought that of the 10 million Brits that smoke, three million of those have some sort of mental health condition. smoking is just one way of self-medicating.

Given the disproportionate amount of LGBTQ people who experience mental health issues, it would make sense that the number of smokers within that community is higher than the heterosexual general population. It would also make sense that outreach to those in the community by stop smoking efforts are difficult. Both have their own unique and complicated needs that require specialised and sensitive approaches that health services sometimes struggle to provide.

Personally, the allure of smoking began to lose its sheen when I realised that the crux I had used as a young gay teen vying for the attention of men old enough to know better was no longer a crux but a habit.  Also, both Bridget Jones and Dot Cotton gave up, and if they can do it then I definitely could.

Given that two-thirds of smokers wish that they had never started, there’s no better time to call it a day and quit cigarettes. Luckily, people who combine support from local services such as smoking cessation treatments with aids like nicotine replacement therapy or e-cigarettes are, according to the NHS, four times more likely to quit cigarettes for good.

What giving up smoking doesn’t do is prevent you from heading to the smoking area. Sure, you’ll be surrounded by triggers and people smoking around you, but if you use an e-cigarette to quit it’s the perfect opportunity to pop out to cool down or chat up that cute guy. But what’s even better, you’re less likely to miss it when you hear those immortal words: “I’m so into you, I can barely breathe.” Surely, it’s worth it for that alone.