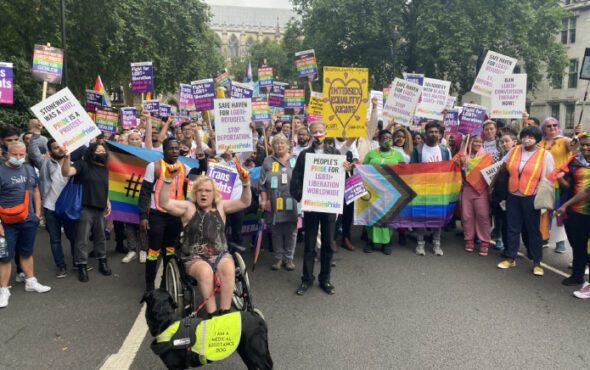 The first Reclaim Pride march occurred this Saturday (24 July) to bring Pride events back to their roots.

The march took place throughout central London and went through landmark areas like Parliament Square and 10 Downing Street.

Reclaim Pride demonstrators also tackled the lack of rights and protections for the trans community.

Natalie June-Whitaker, one of the event’s attendees, opened up to Reuters about the disruption of trans rights taking place.

“We are seeing… increased amounts of transphobic articles [in the media],” she said. “[They are] attacking trans people and increasing anti-trans rhetoric.”

Alongside the rising numbers of transphobia within the country, many activists have called on the government to reform the outdated Gender Recognition Act (GRA).

Back in September 2020, Liz Truss – Minister for Women and Equalities – announced that the GRA would not be reformed, despite the government’s own consultation on the matter finding overwhelming public support for allowing self-ID.

The march also highlighted the lack of racial diversity at the commercialized annual Pride events.

“We’re here to say that Pride is about inclusion,” she told Reuters. “It’s about diversity, about speaking truth to power on a number of different issues for our trans non-binary siblings and for Black Lives Matter.”

Huge thanks to @ukblackpride & @MsLadyPhyll for a their support for UK’s first #ReclaimPride march today. Thousands celebrated AND protested for LGBTI+ rights. We told Boris Johnson to stop stalling on LGBTI+ rights! And expressed solidarity with #BlackLivesMatter & PoC x pic.twitter.com/5WmphxzPzW

At the end of the march, Peter Tatchell – the co-organizer of the event –took to Twitter to reiterate the importance of the protest.

“London’s #ReclaimPride today showed that #Pride doesn’t have to be corporate & commercial,” he said.

“It was a celebration AND protest. We told Boris Johnson to stop stalling on LGBTI+ rights: Ban conversion therapy NOW! Reform the Gender Recognition Act! Safe haven for LGBTI+ refugees!”

London’s #ReclaimPride today showed that #Pride doesn’t have to be corporate & commercial. It was a celebration AND protest. We told Boris Johnson to stop stalling on LGBTI+ rights: Ban conversion therapy NOW! Reform the Gender Recognition Act! Safe haven for LGBTI+ refugees! pic.twitter.com/lLk2E0nJAi

One user wrote: “#ReclaimPride was an absolute joy. So much good-will, solidarity, and passion, with none of the rainbow capitalism or political quietism of its ‘official’ counterpart.”

Another person tweeted: “It was so lovely, full of such an amazing crowd of like-minded people, all in the name of LGBTQIA+ equality, liberation & freedom! A reminder to also donate to causes at these events if you are able to! It matters & helps in ways that protesting cannot. #reclaimpride.”

London’s Reclaim Pride joins a growing list of events that call out the commercialisation of Pride.

In 2019, New York held its first Queer Liberation March to honour the anniversary of the 1969 Stonewall Uprising. The event was created by numerous LGBTQ+ activists and advocates who wanted an event that was free from corporate sponsors and police presence.

The Queer Liberation March celebrated its third year at the end of June – Pride Month.

London’s “official” Pride march is set to take place in September after being delayed due to the ongoing COVID-19 pandemic.

Check out some of the incredible tweets and photos of the march below.

#ReclaimPride in London today with @wearemadlug representing. All about bringing pride back to the #LGBTQI+ community over corporations & profit. #London #pride pic.twitter.com/Sern8yaZyt

In solidarity with #ReclaimPride LGBTIQ 🏳️‍🌈 people around the world have the right to a peaceful life and protection of our human rights pic.twitter.com/TIZPnwbTLM