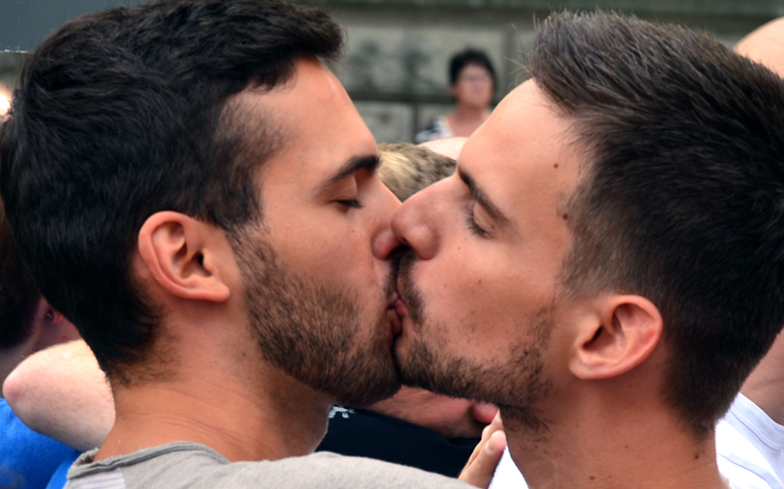 The event was attended by a few dozen people.

LGBTQ activists in Panama have protested the Pope’s arrival in their country with a kiss-in held in front of a church. The church chosen, the Del Carmen, has been a symbol of protest ever since protesters gathered outside of it during the 1980s in opposition to the then dictator Manuel Noriega.

Flyers advertising the event read: “Let’s kiss and celebrate love.” However, even the flyers caused controversy, due to the heavy Catholic presence in the country.

A television host, Gisela Tuñón tweeted that she would always “defend” the LGBTQ community “when they’re right.” She described the protest as “unnecessary” and finished her post by saying: “Respect requests respect.”

However, this didn’t deter protesters and dozens of them attended the event. Many were wrapped in rainbow flags, and held various signs. One said “Homophobia is a sin,” while another simply said “We are visible.”

Speaking to the media, Levis Calderon said: “Together as a community, we are saying: We are here.” Another protester, Hilka Zapata said: “Our call to him [Pope Francis] is that something very different is happening here to what he preaches.”

Samirah Armengol, who has been kicked out of restaurants and shopping centers because of her sexuality, told AFP: “They say it’s disrespectful that we kiss in front of a church, but I ask them a question: Why is it not disrespectful when heterosexuals do it? Is it that I am an aberration? We exist!

“I believe that the Pope is more convinced of our humanity than his followers because he has already said so.”

The current Pope has a mixed record when it comes to supporting LGBTQ rights. He’s told a gay victim of clerical sexual abuse that God had made him gay and that he loved him anyway. He also congratulated a gay couple for baptising their child, although a Vatican source said that it was just a generic response.

On the negative side, and buckle up there’s a lot, he’s said that gay children should be taken to psychiatrists, refused to accept that LGBTQ families were real, said that teaching children about gender identity was “indoctrination”, and supported anti-same-sex marriage protesters in Mexico.