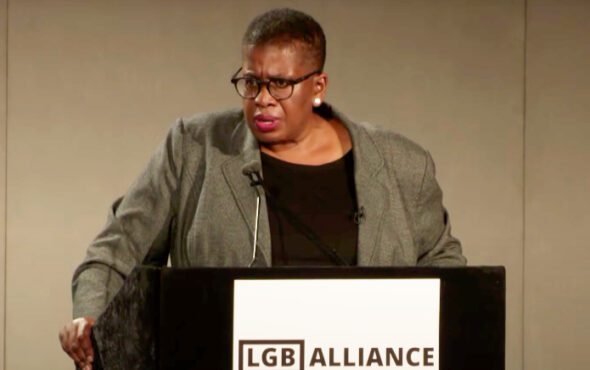 The lesbian defence barrister, who co-founded the anti-trans hate group LGB Alliance, accused Garden Court Chambers of withholding work from her after she criticised the charity’s Diversity Champions scheme, which ensures that all LGBTQ+ people are free to be themselves in the workplace.

Bailey, who describes herself as a “gender critical feminist”, said Stonewall’s views were “exclusive” and “discriminatory” of her beliefs and claimed the organisation ‘harassed, intimidated and threatened’ those who oppose their trans-inclusive values.

Garden Court Chambers later announced that Bailey’s transphobia would be investigated. In December 2019, they discovered that two of her tweets were likely to have breached barristers’ core duties.

Bailey told the tribunal that her income was damaged after the chambers offered her “interior brief after interior brief” and that they tried to “crush her spirit” in an attempt to make her quit.

She used a crowdfunding platform to raise over £500,000 to fight the legal battle.

On 27 July, the London Central Employment Tribunal ruled that Bailey’s belief – that Stonewall’s aim is to replace sex with gender identity – was protected under the Equality Act, awarding her £22,000 in aggravated damages.

Another key finding was that her belief that “gender theory as proselytised by the First Respondent is severely detrimental” to both women and lesbians is also protected under philosophical belief.

Bailey described her win against Garden Court Chambers as “vindication” for those who “object to the erasure of biological sex, of women, and of same sex attraction as material realities.”

However, the tribunal found that Bailey didn’t lose work and her income was not severely impacted, “let alone significantly influenced” because of her anti-trans views or opposition to the chambers’ membership of the Diversity Champions scheme.

It also rejected her claim that the Garden Court Chambers had a “practice of treating gender critical beliefs as bigoted,” concluding there was “no evidence whatsoever that Stonewall directed Garden Court’s investigation process”.

In a statement, Stonewall said they were “pleased” the Employment Tribunal ruled in favour of the charity having no part in ‘instructing, causing or inducing’ Garden Court Chambers to discriminate against Bailey.

“Our Diversity Champions programme supports employers to make their workplaces inclusive and supportive of LGBTQ+ employees,” they wrote.

“It provides resources, guidance and support for organisations who are committed to creating a workplace where everyone can thrive. We are incredibly proud of the inclusive communities these organisations are creating across the country, by going above and beyond the legal minimum to provide leading support for LGBTQ+ people at work.

“The case heard by the Employment Tribunal did not accurately reflect our intentions and our influence on organisations.

“Leaders within organisations are responsible for the organisational culture and the behaviour of their employees and workers. Stonewall’s resources, support and guidance is just one set of inputs they use to help them as they consider how best to meet the needs of their own organisation.”