Let’s create a community where all can be out and proud; binary and non-binary people alike 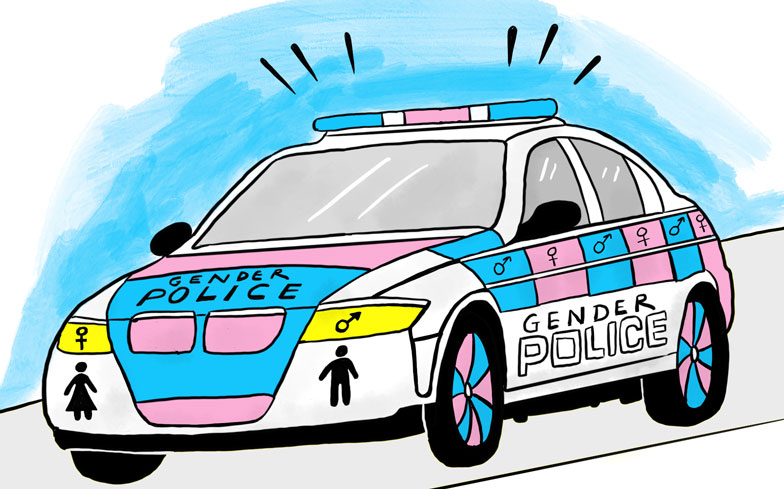 Why should we compromise our identity?

When we finally drummed up the courage to tell people we were trans, we both realised that we were coming out in a world that didn’t really understand the diversity of trans identities at all.

Most people back then had heard about what it was to be a trans woman or a trans man, but the idea of non-binary trans people seemed even more alien. People who do not exclusively identify as a man or a woman still confuse people.

Similarly, we hit brick walls when seeking healthcare because if you wanted access to hormones and surgeries, and if you wanted people to accept you, you had to give them all the classic reasons: born in the wrong body, knew it from an early age, played with those toys, hated those clothes. We’re forced to simplify our experiences in order to get people to understand us. It’s exhausting really. But we played along and told everyone that we were simply a trans woman and a trans man.

The popular phrase of the ‘final puzzle piece falling into place’ was often used. In fact, if we had a pound for every time someone said to us “I knew it already!”, we’d probably be rich. If only these people would have used their apparent psychic powers to tell us sooner.

Related: Gender identities, obstacles and allies: We’re in this together, remember?

All the while, we were hiding the fact that we were in fact non-binary – we didn’t fully feel like either a man or a woman – because we were afraid people wouldn’t understand and that they wouldn’t be comfortable with us. As a result, we compromised our identity. Doesn’t sound very healthy, does it? But hey, at least no one else was uncomfortable!

This type of compromise is unfortunately very common amongst non-binary trans people, and we hear story after story where people tell us that they present themselves as trans women or trans men to their family or colleagues out of fear of being misunderstood. Even binary trans women and trans men hide their trans identity from their workplace or people outside of their family out of shame, fear and judgement. So the idea of being out and proud isn’t exactly always possible for everyone. Party, right?

Our society is obsessed with the idea that there are only two genders, specifically that they are governed by what parts you’re born with. If you’ve ever peeked at the comment section under any content about trans people, you’ll probably see someone hysterically writing in capslock how a penis makes you a man and how a vagina makes you a woman. Their obsession with genitals borders on being unhealthy, as they probably spend more of their time thinking and talking about trans people’s genitals than trans people themselves.

We as a society are so obsessed with policing gender in terms of what is cool and what isn’t. It’s those times when you feel uncomfortable about not being able to tell someone’s gender. It’s that time when we felt like the size of that woman’s hands were just a bit too big. It’s that time you felt like that guy just needed to ‘man up’ a little. It’s saying that you can’t be a certain gender because you have certain genitals. It’s being that annoying person that asks a complete stranger if they are in the right bathroom – I’m pretty sure people are fully capable of knowing which bathroom is theirs. But thanks anyway, your input is really appreciated! Perhaps it’s time to stop telling other people how to be, and just let everyone do their thing? Just a thought. Only now are we starting to have conversations that go beyond the binary, but it comes with a pushback. It seems that people are somehow threatened by the fact that not all people fall into the neatly constructed boxes of being a man or a woman. Even for some binary trans people, this is seen as a threat to the identity that they have fought very hard for. Truth is, non-binary people and trans people in general have always existed in all cultures throughout history, and it is only relatively recently that the definition of gender has become so limited and rigid. When we think about it, how does it serve anyone to be confined, judged and treated differently based on your perceived gender?

Non-binary people aren’t the only ones denouncing gender stereotypes, because there are all sorts of people that reject stereotypes. Not adhering to the mould doesn’t make or break your gender identity, because we all know that men and women can have all sorts of expressions and personalities. A boy in a princess dress is still a boy in a princess dress, unless he says otherwise. Clothes do not maketh the man, woman or non-binary person. Non-binary is a gender identity that is just as real and just as valid as anyone else’s. Why is it so hard to imagine that out of the 7 billion people on this planet, not everyone falls into two binary categories?

Pride is supposed to be a time to celebrate who we are and how far we’ve come, as well as a reminder to the world of just how much there is still to do. It’s born from a revolution where trans women of colour led the way, where a community of diverse and amazing people decided that they weren’t going to be silenced anymore. It’s a time where we come together as a community in solidarity and show the world that we’re out and proud. We’re not hiding anymore and we should never have to. We’re going to fight for our rights and we need people to support us.

So let’s make a commitment to work together and stop policing each other’s gender and gender expression. What would it be like to live in a society where everybody can express themselves however they want to, regardless of their gender? We can guarantee you that this would ultimately result in a better society; for you and for everyone else.

So if you know someone who is non-binary or anyone that has a gender expression that breaks norms and boundaries, celebrate them. Show them that they never have to be ashamed of themselves and that they never have
to hide it. Let’s create a community where we can all be out and proud; binary and non-binary people alike.

Now that would be something to party about.