Lesbian punched and thrown to the ground in violent homophobic attack 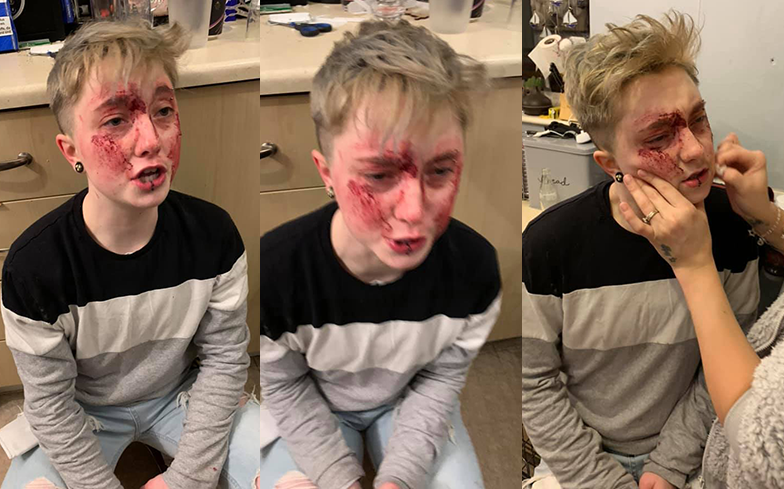 This was the fifth consecutive time she was targeted for her sexuality.

A 20-year-old lesbian was left covered in blood after a brutal homophobic attack in Sunderland, England.

On Saturday morning (11 January) at 12.50am, Charlie Graham was on her way to meet a friend in Town End Farm when, out of nowhere, two homophobic thugs punched her in the head from behind and threw her to the ground.

“I got hit from behind by a fist to the back of my head, then I hit the ground, hurting my legs and face,” Charlie said shortly after. “I tried to get back up, but they pushed me back to the ground and the two guys ran off. I was left bleeding and scared.”

Since the assault, Charlie has been left with a severe headache, constant panic attacks and is afraid to leave the house.

This was reportedly the fifth time she has been targeted for her sexuality. She previously had her eye split open – which required stitches – was punched and called a “dyke” and in another she was given a black eye.

“It has knocked my confidence back,” Charlie continued. “I don’t go anywhere by myself anymore.

“I only feel comfortable at my mum’s house. I have panic attacks and anxiety attacks just thinking about going home in case they find out where I live and decide to come through the door, or I get attacked in my own home.

“I have had people threatening to come through my door and smash the windows in.”

However, Charlie said it’s important to be “proud of who you are” and said she shouldn’t have to stay in the house and hide who she is in this “day and age”, adding: “I do worry if it happens again that it is worse than it was before.”

She explained further: “I do look like a boy and I do act like a boy and there is no femininity about me at all. But I am not aggressive, or rowdy and I don’t pick fights. I have never opened my mouth to anybody.”

Charlotte’s mother, Michelle Storey, confirmed that her daughter is a frequent victim of homophobic abuse.

“Me and Charlotte laugh about the verbal abuse but when she is out on her own it must be really hard,” she said. “At the end of the day if you are gay, straight, or whatever colour you are, what does it matter?

“Charlotte’s always dressed the way she did and I have always allowed that because she is my daughter and it doesn’t matter to me as long as she is happy and is loved.”

Police are treating the attack as a hate crime. A spokesperson for Northumbria Police said, “We can confirm we are investigating a report of an assault on Blackwood Road in the Town End Farm area of Sunderland at about 00.50am on Saturday morning.

“It was reported that a 20-year-old woman was walking home when she was subjected to homophobic abuse and assaulted by two males. “She was not seriously injured during the incident but was very shaken up by the attack.

“Enquiries to identify those responsible is ongoing but this is being treated as a hate crime by police.”