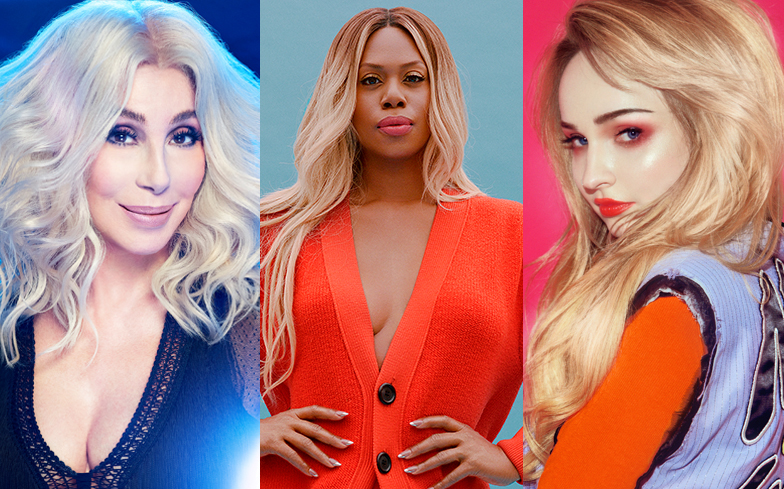 Following the news that Trump’s administration is reportedly planning to strip trans people of official recognition, protest rallies have taken place across the US.

A leaked memo seen by The New York Times seeks to establish a legal definition of sex under Title IX, the federal civil rights law that bans discrimination on the basis of sex.

A host of high-profile trans activists and celebrities tore apart the Trump administration’s reported proposal, as well as speaking out about the horrifying impact this would have on the 1.4 million trans people who currently live in the United States.

“Only birth sex will be valid. disputes to be settled by genetic tests. He’s already put people in charge who will approve this.”

Pop star Kim Petras added: “Gender roles don’t define people at all. Nobody is better than anybody else.

Shit is just labels we put on ourselves that make us miserable . Equality is about seeing beyond that and seeing that what matters is if you’re a nice person or if you’re good at something , if you’re honest , if you’re fun . You’re so much more than just a fucking gender 💕

“Shit is just labels we put on ourselves that make us miserable. Equality is about seeing beyond that and seeing that what matters is if you’re a nice person or if you’re good at something, if you’re honest, if you’re fun. You’re so much more than just a fucking gender.”

Laverne Cox gave a powerful statement 0on Instagram, calling for the trans community and their allies to stand strong against this proposal.

“In indigenous cultures all over the world gender existed beyond the binary and folks who we would call trans today held sacred places in those cultures. Western colonialism drove those trans folks to the margins but we have always been here. Marginalizing trans folks is another Example of the brutality of colonialism.

We must not give up the fight. But in the face of this affront on my existence and the existence of my community I choose love not fear. We exist and always have.

“This latest administration effort to legislate trans folks out of existence is yet another example of why the fight for gender equity must be intersectional and necessarily must include trans folks. Trans folks need everyone to stand with us in this fight, to let our government know this is not who we are.

“We need the citizens of Massachusetts to #VoteYesOn3 Nov. 6 to send a strong message that you value the lives of your trans friends, family and neighbors.

“Trans people have been under attack by this administration from day 1 and in state legislatures for years now. Let’s join together America and assert.”

Speaking at a protest rally held by Voices4 in New York City on Sunday evening, Pose actress Indya Moore gave a rousing call to arms against the bigotry the trans community faces from the current administration. “There is a spiritual war. It attacks our hearts, our souls and most importantly our bodies,” she said. “We are at the mercy of someone’s political opinion and that is not okay.

“It’s never okay for the fundamental rights of human beings to be up for debate. We must fight narcissism with humility.”

She added: “We step away from homogeny and into differentiation because that is how we were made. We do fit into binaries. This world is not black and white.

“Why is it that I, someone who dropped out of tenth grade, has more sense than the people running our government?”

Drag Race star Carmen Carrera also spoke at the rally, adding: “I am so proud of my trans sisters and brothers who have not let this fight break their spirit. That takes true resiliency.”

Pop legend Cher – whose son Chaz Bono is a trans man – tore the Trump administration apart with a single tweet.

Trump Administration Eyes Defining Transgender Out of Existence via @NYTimes
Fk These Ppl.Will MY SON Be Sent To INTERNMENT CAMP 2 Live with LATINO Children,& Be Kept In Cages in Places where🇺🇸Cant See Them.THIS IS”HIS CODE”4,..MAKE THEM DISAPPEAR #MBS https://t.co/UrXYSo5vK5

“Fuck these people,” she said. “Will my son be sent to [an] interment camp to live with latino children, and be kept in cages where Americans can’t see them?

“This is his code for ‘make them disappear’.”

“Think about what is happening here… The administration’s memo is a dog whistle to all Americans who believe that there are two fixed gender identities,” she said. “It’s a call for them to VOTE. This is how Trump’s agenda functions – FEAR. You can combat this by VOTING.

She added: “It won’t matter to Trump if this memo passes or not. It has served it’s purpose in making us angry, which reminds hate filled Trump voters to go out and VOTE for more hate. Make sure you VOTE to counter this…”