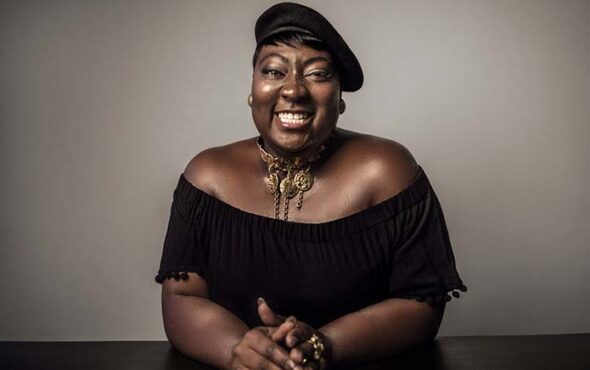 Lady Phyll has opened up about what growing up as a Black, LGBTQ+ person in the UK was like for her and how things have changed since then.

During an appearance on Just Like Us’ new podcast series, Growing up LGBT+ in celebration of Black History Month, Lady Phyll (Phyll Opoku-Gyimah) discusses why inclusive education and representation are so important for the community.

The 46-year-old has had a long career which has seen her work with Stonewall, Sista and the Trade Union Congress, among others.

Now, she is the Executive Director of Kaleidoscope Trust and co-founder of UK Black Pride – Europe’s largest celebration for LGBTQI+ people of African, Asian, Caribbean, Latin American and Middle Eastern-descent.

“You only see what is an ideal standard of beauty or acceptance in media,” she shares of growing up as a member of the LGBTQ+ community with little representation.

“I had role models and people who helped shape my thinking, what my theory of change might look like in particular instances, and how UK Black Pride was born was because of those that came before me,” she adds.

Lady Phyll, who is also an activist, shares that she has been challenging the status quo since being in school and wants to see education become more inclusive.

“I love history and I was taught about Christopher Colombus, the Battle of Hastings 1066, I can recite the names of Henry VIII’s wives but I was never taught about colonialism and enslavement and slavery and capitalism and how Britain benefitted off the backs of Black people through enslavement.

“I would always question and I would be sent out of the classroom for disrupting.”

In her adult life, Lady Phyll has dealt with being stereotyped as “the angry Black woman” – but this hasn’t stopped her “conviction and passion” for standing up for what’s right.

“I’ve been sent out of the boardroom for being disruptive,” she reveals. “I am what some people see as the angry Black woman – those tropes and stereotypes that exist – because I question, so things have changed since school but some things have stayed the same.

“I’m glad my conviction and passion have stayed the same to continue to challenge and question when something doesn’t feel right for our communities or people.”

In hindsight, there’s a lot she would tell her younger self to help her through education and dealing with people trying to tear her down.

You can listen to the new podcast series from Just Like Us below or by clicking here, including Lady Phyll’s episode.