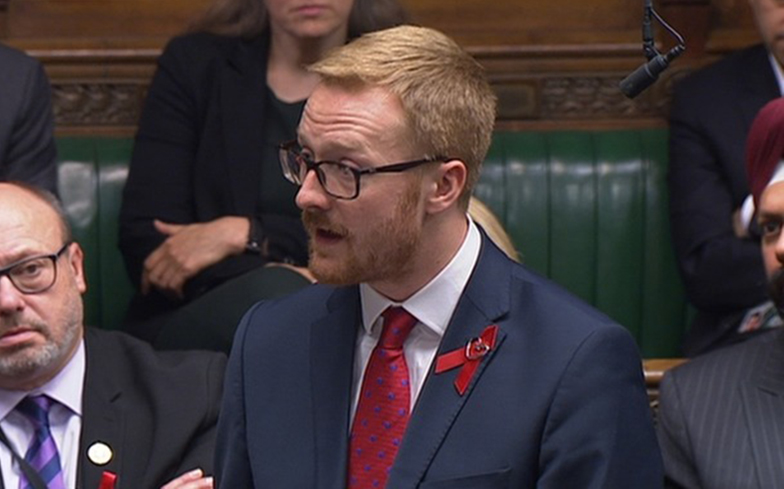 Labour MP Lloyd Russell-Moyle has told the House of Commons that he is HIV positive during a powerful speech in Parliament.

The politician – who is the MP for Brighton Kemptown – is the only current sitting MP to disclose that he is living with HIV.

Russell-Moyle said that he decided to speak publicly about his diagnosis because “he has a duty as a Member of Parliament.”

“Next year I’ll be marking an anniversary of my own: 10 years since I became HIV positive,” he said in the House of Commons.

“It’s been a long journey – from the fear to acceptance and from today advocacy, knowing my treatment keeps me healthy and that it protects any partner I have.”

During an interview, Russell-Moyle said he was “relieved” to have publicly disclosed that he his HIV positive.

He revealed that he has timed his announcement to coincide with the 30th annual World AIDS Day on 1 December, which is this Saturday.

“I felt like I had a duty as a Member of Parliament – a few months ago I was giving out awards, congratulating people who have spoken out about their HIV status, saying how brave they were, and there was a feeling in the back of my mind saying ‘Well, if I’m congratulating people, I also need to be so brave to do that’,” he said.

#WorldAIDSDay: Labour's Lloyd Russell-Moyle becomes first MP to announce in the Commons that he is HIV positive, saying "it has been a long journey from fear of acceptance… to advocacy"

“My job as an MP is to speak out about personal experiences and linking those with political experience. And if I can’t do it, how can I be asking others to do that?

“Secondly, I think that we are genuinely at a real crossroads about where we can go with HIV now.

“We start to see really the tools in our hands to eliminate HIV, really start to reduce HIV infections.

“But at the same time, the Government is starting to slash sexual health budgets. It has, of course, already done this crazy thing of putting (the responsibility for) sexual health into local councils and out of the NHS.

“We have got the tools but we seem to be going in the wrong direction. So, for me, there was also this political element that I can’t keep quiet about that any more, particularly when it not only affects people I know but it affects me so personally.”

Reacting to Russell-Moyle’s announcement, Deborah Gold, Chief Executive of NAT (National AIDS Trust) said: “Lloyd has the full support of NAT in telling the public that he is living with HIV.

“Although no one is obliged to be open about their status, and it isn’t always an easy decision, the same stigma that makes it hard to say you have HIV, is a stigma that is gradually eroded by people being open and proud.

“HIV, as Lloyd shows us, is no longer a death sentence and for most it no longer even significantly compromises their health. It is a manageable condition; illness and the risk of passing it on to others can be completely averted with simple daily medication.

“These simple messages can be a powerful antidote to HIV stigma, and by his action today, Lloyd has drawn attention to these facts and shown solidarity with the 101,000 people also living with HIV in the UK.

“As the first MP to disclose their HIV status in the House, Lloyd has taken a big step and we absolutely applaud him.”