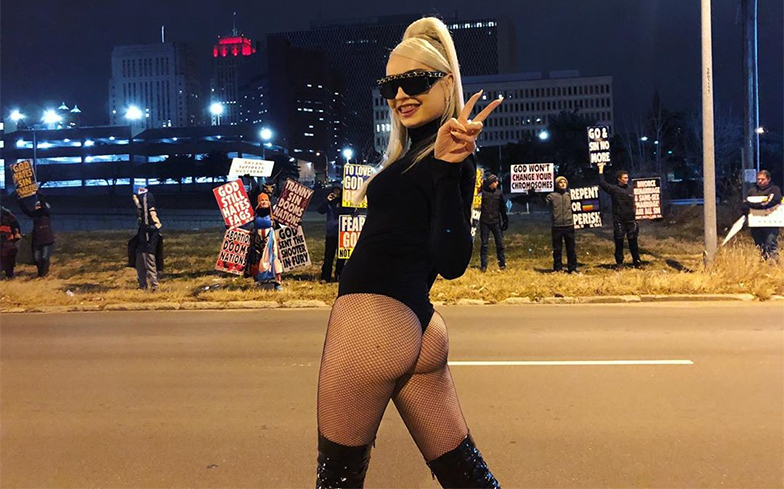 She ain’t worried ’bout shit, you a parody.

On Sunday (1 December) night, a group of protestors from the notoriously anti-LGBTQ Westboro Baptist Church turned up to picket Kim Petras’ show in Kansas City, Missouri, citing the fact that the pop star is trans as their reason.

The church, who have a long and insensitive history of picketing funerals and LGBTQ events, announced their plans in a tweet last week where they accused Kim of “departing from the pure standards of God”.

Fortunately, Kim was able to brush off the threat and replied with a mock news report of her giving no f*cks alongside the headline “News: Hoes mad”.

“This is my official statement on wbc picketing my show in kansas tomorrow. this is the energy i’m bringing n it should be yours too,” she wrote.

A small group of protestors from the church followed through with thei plan, and turned up holding signs with messages including, “God made you male or female, be content and obey him,” and “Tr*nny sin dooms nation”.

Kim’s response? To have a photoshoot in front of them and look fierce AF while doing so.

As well as being trolled by Kim, the pop star’s fans took to social media to defend their fave.

“Damn this is about to be GOOD promo for Kim,” wrote one, while another added: “They jealous that Kim partying with Jesus.”