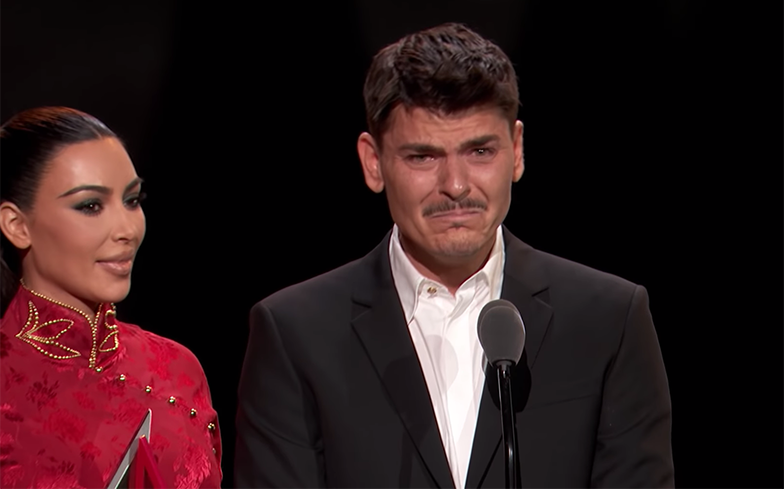 “I stand here for the first time in my life a proud 37-year-old gay man.”

Mario Dedivanovic stole the show at this year’s American Influencer Awards after bravely coming out as gay on the main stage.

At the ceremony, the renowned makeup artist was presented with the Artist Achievement Award by his client – and best friend – Kim Kardashian West, to commemorate his remarkable 19 years in the industry.

“He really has respectfully worked his way up the makeup artist ladder. We’ve worked together for 11 years, so 11 years of fights. We fight like you don’t even understand, like brother and sister,” she told the crowd.

“But he’s created some of my most magical memories and really I believe made me who I am today. He also really helped with my KKW Beauty Brand. He’s always there no matter what. And I love him.”

A visibly emotional Dedivanovic accepted the honour and told the audience that he had to be “honest” with them.

“A couple of days ago on my mother’s 73rd birthday, I walked home after a day of stressful meetings at work and she was there doing my laundry and I broke down to her crying,” he said.

“I told her finally that I had spent my entire life and childhood suppressing my thoughts, suppressing my dreams, my feelings, my creativity and trying to be invisible so that no one would know how I’m feeling inside.”

Dedivanovic said he knew that he was born different, but was “traumatised” and couldn’t live as his authentic self; until his mother told him to “never again live in shame or fear or to be afraid of who you are”.

“Little boys and girls around the world are growing up with pain and fear like I did, thinking of killing themselves like I did,” he continued. “Because they are different and they are scared to be themselves, because their culture or family judged them.”

He then broke down in tears as he announced to the room: “I stand here for the first time in my life a proud 37-year-old gay man. That bright light that I’ve been dreaming of my whole life is pouring from my soul around my body and it’s mine.

“I can now live the life that I deserve and right now I feel true happiness.”

Dedivanovic’s heartfelt speech was met with a standing ovation from attendees. Watch below at the 2:19:00 mark.