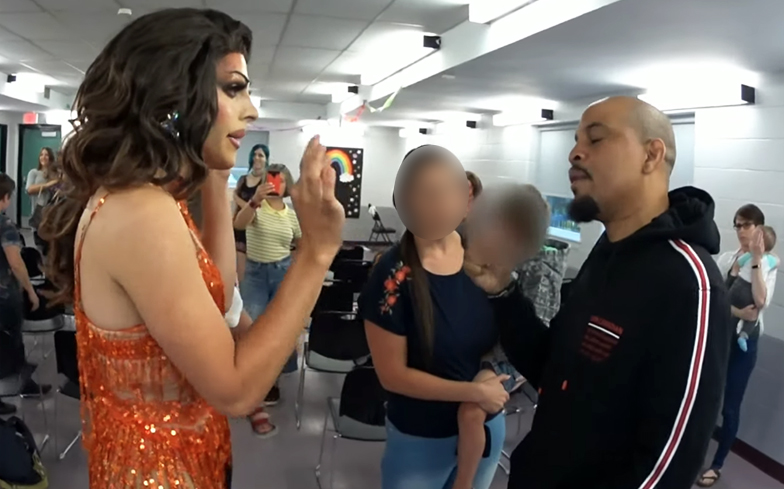 The protester interrupted an event that was being held as part of Ottawa’s Pride.

During a story-telling event hosted by the Canadian drag queen Adrianna Exposée in Bells Corner, Ottawa on 17 August, a protester stormed into the event telling attendants “everyone here is going to be cast into a lake of fire” and accusing parents of being “child abusers”.

“Everyone here needs to repent, turn from your wicked ways, and accept Jesus Christ and be saved. That’s the only way you’re going to be saved,” the man can be heard saying in a video captured by someone in attendance.

The protester in the video is said to be a man by the name of Dorre Love, a preacher who is known for his fundamentalist views and religious outbursts.

Rick Boswick, an anti-LGBTQ protestor and supporter of Love, told CTV News: “I think that the citizens of Canada should be concerned about what our children are learning.”

Yet Exposée did not let Love get away with his claims. In the video, you can hear the drag star embodying the true meaning of Pride – to stand tall and not back down.

The incident occurred just hours after Ottawa’s Mayor, Jim Watson, came out as a gay after being closeted for nearly 40 years.

In his column for the Ottawa Citizen, Watson explained: “My reluctance has not allowed me to live my life as full of love and adventure as my gay friends who were bold and braver than I ever was.”

Though the disruption from Love has left many people feeling disheartened, the Canadian Capital is not holding back on love or boldness.

Canadian politician Lisa MacLeod told CTV News: “I will work with the business improvement area, our local city councillor Rick Chiarelli and anybody else who wants to make sure we can put that event back on bigger and better.”

On Sunday, the day after the hate speech, there was an increased presence of police put in place at the Pride picnic event located in Hintonburg Park in order to promote security.

“I think it actually happened at the perfect time, right before Pride, because that’s why we’re protesting.” says Exposée.

So, no matter what, the Pride flag is flying high this week at Capital Pride.