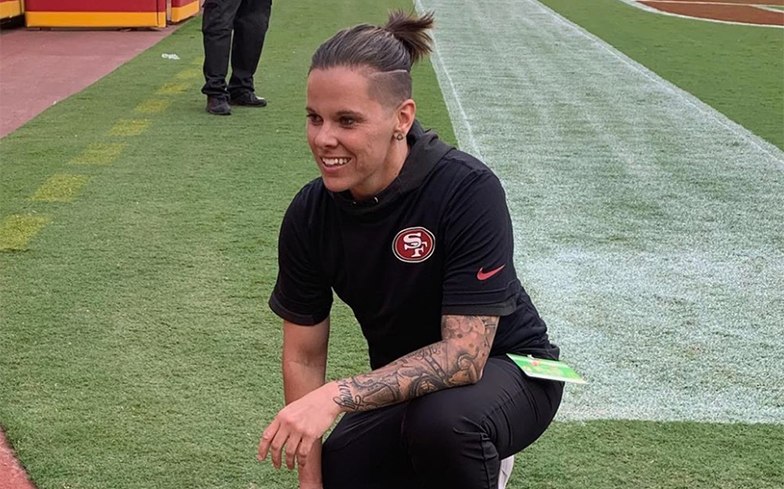 Katie Sowers is about to make history as the first woman and openly LGBTQ person to coach at the Super Bowl.

The sports star, who previously made history as the first openly queer coach in NFL, is the offensive assistant coach for the San Francisco 49ers, whose win against the Green Bay Packers secured them a spot in the championship game.

It will take place 2 February at the Hard Rock Stadium in Miami, and the team will face-off for the title against the Kansas City Chiefs. The halftime show will feature performances from both Jennifer Lopez and Shakira.

“She has been tremendous,” 49ers quarterback Jimmy Garoppolo said last week of Sowers. “Katie was here before I was, but just what she does with the receivers, all the skill positions guys, how she interacts with them. It’s special.

“She’s feisty, man. Katie is awesome out there. She’ll get after guys. It’s fun to be around.”

Billie Jean King, gender equality advocate, praised Sowers for making history, writing on Twitter: “Congratulations to @KatieSowers of the @49ers, who will become the first woman to coach in the #SuperBowl. You have to see it to be it!”

When Sowers came out in 2017, she said that one of the most important things in life is to being “true to who you are”.

“There are so many people who identify as LGBT in the NFL, as in any business, that do not feel comfortable being public about their sexual orientation,” she told Outsports. “The more we can create an environment that welcomes all types of people, no matter their race, gender, sexual orientation, religion, the more we can help ease the pain and burden that many carry every day.”

In November, Sowers told People that she doesn’t want her status as the second female NFL coach define her career.

“They see me for who I am as a coach, and not a female coach.”