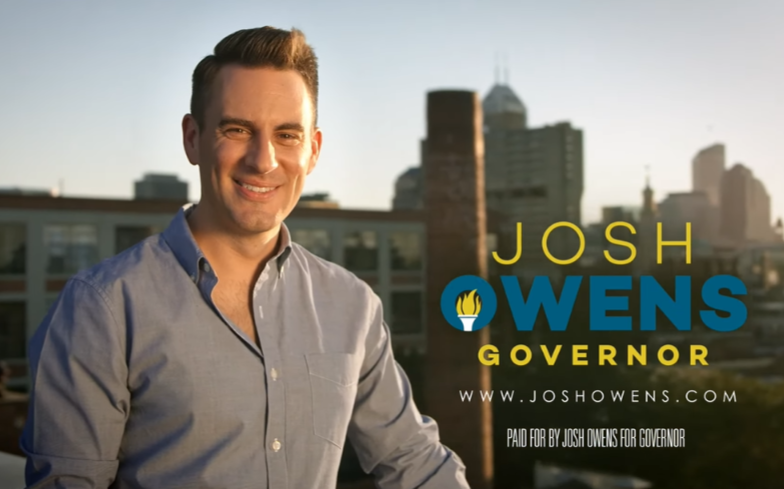 Josh Owens is running to be governor in Mike Pence’s home state.

Josh Owens has announced that he will be the first openly gay man to run for the position of Governor of Indiana. If elected, then he will become the governor for Mike Pence’s home state.

Owens is a former teacher, and is currently the CEO of SupplyKick, which describes itself on its website as a “full-service retail partner for navigating Amazon’s complexity and developing long-term growth strategies that will drive sales.”

The main part of Owens’s election campaign video focuses on education. In the video, he says: “I’m running for governor now because I believe in an Indiana where teachers are paid what they deserve.

Other key pledges in his campaign video include having “affordable healthcare for all Indiana families,” making the economy work for everyone and because he “believes in an Indiana where all are welcomed, respected and protected.”

During this point the video, several couples are shown including a lesbian same-sex couple. A Pride flag can also be seen near the beginning of the video.

Watch the video below, or by following this link.

The Daily Herald reports Owens as saying: “I think there’s actually a lot of hunger in Indiana for a diverse set of policies, policies that aren’t just exclusively about balanced budgets and lower taxes.

“I am supportive of our balanced budget structure. I think a lot of what I’m talking about isn’t tax based, it is about our priorities.”

However, Owens will face a lot of difficulties as Indiana is seen to be a very conservative state, and hasn’t elected a Democrat as its governor for 14 years. The state is also one of 23 states that allows discrimination based on someone’s sexuality.