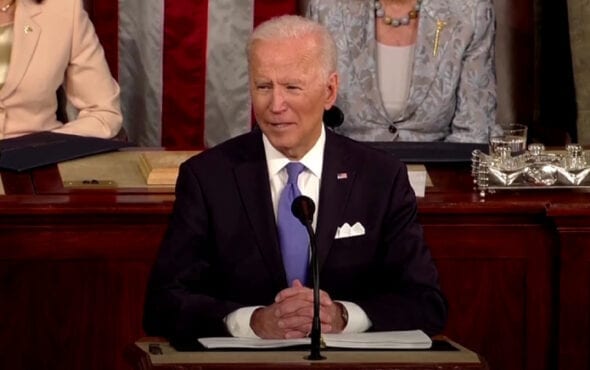 Joe Biden has proven his status as one of the most inclusive presidents in history with his essay for Pride Month.

The US president began his proclamation by remembering the Stonewall Uprising of 1969, calling the liberation movement a “call to action that continues to inspire us to live up to our Nation’s promise of equality, liberty, and justice for all,” before reaffirming his commitment to LGBTQ+ Americans in their “ongoing struggle against discrimination and injustice”.

Biden proceeded to recognise the “remarkable progress” that’s been made since Stonewall, including marriage equality and workplace protections for LGBTQ+ citizens, as well as the Matthew Shepard and James Byrd, Jr. Hate Crimes Prevention Act, which “broadened the definition of hate crimes to include crimes motivated by sexual orientation or gender identity”.

“Members of the LGBTQ+ community now serve in nearly every level of public office — in city halls and State capitals, Governors’ mansions and the halls of the Congress, and throughout my Administration,” said Biden.

Later, Biden addressed the lack of protections for LGBTQ+ individuals in areas such as hospitals, schools and public accommodations, and the ongoing violence against transgender women of colour in the United States.

“LGBTQ+ individuals — especially youth who defy sex or gender norms — face bullying and harassment in educational settings and are at a disproportionate risk of self-harm and death by suicide,” explained Biden.

“Some States have chosen to actively target transgender youth through discriminatory bills that defy our Nation’s values of inclusivity and freedom for all. Our Nation also continues to face tragic levels of violence against transgender people, especially transgender women of color.

“And we are still haunted by tragedies such as the Pulse Nightclub shooting in Orlando. Ending violence and discrimination against the LGBTQ+ community demands our continued focus and diligence. As President, I am committed to defending the rights of all LGBTQ+ individuals.”

In his proclamation, Biden promised to take “historic actions” to ensure full equality for LGBTQ+ families and referred to his first day as president, in which he signed an executive order “to fully enforce all Federal laws that prohibit discrimination on the basis of gender identity or sexual orientation.”

Biden has also signed an order “affirming all qualified Americans” will be able to serve in the Armed Forces of the United States — including patriotic transgender Americans who can once again proudly and openly serve their Nation in uniform — and a National Security Memorandum that commits to supporting LGBTQ+ Federal employees serving overseas.

“My Administration is also working to promote and protect LGBTQ+ human rights abroad. LGBTQ+ rights are human rights, which is why my Administration has reaffirmed America’s commitment to supporting those on the front lines of the equality and democracy movements around the world, often at great risk.”

Biden concluded his proclamation by telling his LGBTQ+ followers that he will “not rest” until equality is finally achieved and “codified into law”, before officially proclaiming June 2021 as LGBTQ+ Pride Month to “celebrate the great diversity of the American people and to wave their flags of pride high.”

The proclamation is the first for a US president since Barack Obama, after the two-time impeached television personality Donald Trump deserted the practice. He also denied several US embassies the right to fly rainbow flags for Pride Month.

In April, the Biden Administration overruled that ridiculous decision and announced that all US embassies can fly the flag, marking a stark contrast in Biden and Trump’s stances on LGBTQ+ equality and visibility.

You can read Joe Biden’s proclamation for Pride Month here in full.