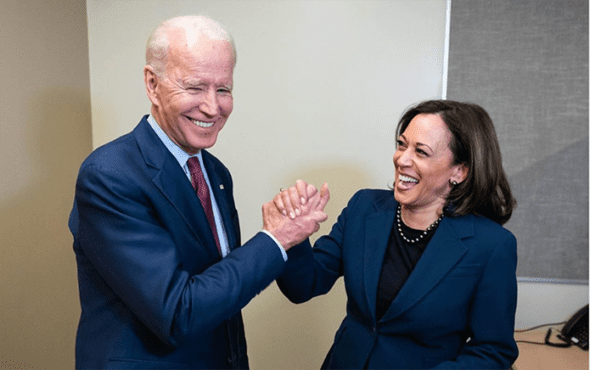 After nearly a week of counting ballots, Joe Biden has officially won the 2020 presidential election against Donald Trump.

Since 3 November, Biden and Trump have been neck and neck with votes throughout the 50 states.

Since the announcement of Biden’s victory, Americans and people from all over the world released their collective breaths.

Harris has become the first woman in history to become the Vice President of the United States. She is also the first African-American and Asian person to ever hold the position.

Since the reveal, Biden supporters, politicians and celebrities have come forward expressing their excitement for the next four years.

Biden took to his social platforms to express his gratitude for being elected, stating: “America, I’m honoured that you have chosen me to lead our great country.”

He continued: “The work ahead of us will be hard, but I promise you this: I will be a President for all Americans –– whether you voted for me or not. I will keep the faith that you have placed in me.”

Harris also took to her social platforms to give a moving statement, saying: “This election is about so much more than @JoeBiden or me. It’s about the soul of America and our willingness to fight for it. We have a lot of work ahead of us. Let’s get started.”

The former President Barack Obama released a statement, stating: “I could not be prouder to congratulate our next President. Joe Biden and our next First Lady, Jill Biden.”

He continued: “I also couldn’t be prouder to congratulate Kamala Harris and Doug Emhoff for Kamala’s groundbreaking election as our next Vice President.”

Donald Trump has of course taken his political downfall quite hard this week, so hard in fact that he has started filed several lawsuits urging key states to recount their votes.

“Beginning Monday, our campaign will start prosecuting our case in court to ensure election laws are fully upheld and the rightful winner is seated,” said the disgruntled soon to be ex-President.

Today has been a great day for democracy.

Of course, the internet has been having their fun by creating hilarious memes in celebration of today’s results.

See some of our favorites below!

President Biden locking Trump out of the White House on January 20th pic.twitter.com/XTxy2lajHd